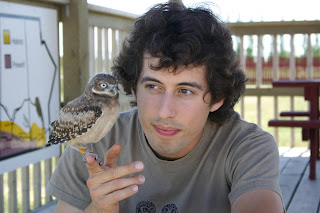 Its the end of summer and its been a great one at that. I was living in Moose Jaw for the summer, working at the Saskatchewan Burrowing Owl Interpretive Centre. Above you can see Sanders, the Burrowing Owl that I imprinted this summer. Basically I got him at 5 days old and raised him until he was 2 months old. He came home with me every night and I was up every hour or so for the first little while! It was the coolest thing ever. Now he stays at the Centre so if you ever want to visit him just stop by the Centre sometime.

I had a busy summer with all sorts of other banding experiences. I helped release the young Burrowing Owls that were raised at the Centre. We released 24 of these cute little guys. However, with a mortality rate of 95-98% in their first year of life, we are not contributing a large number of birds into the breeding population, and this is why we do not consider ourselves a breeding facility. 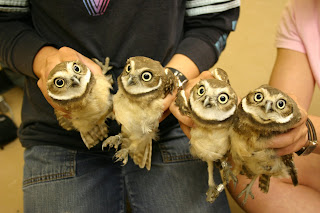 One of the other fun things I got to tag along for was a trip to the Reed Lake Pelican and Cormorant colony, with Dr. Chris Somers' research team. We colour banded some American White Pelicans and Double-crested Cormorants. I had never banded these guys before, but we caught the pelicans much like we round up geese. The birds were quite large, but not able to fly quite yet. It was amazing to be out on the island, but man did it stink!!! 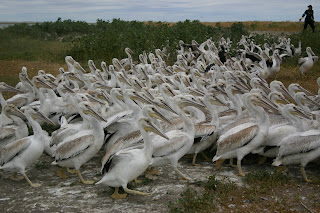 These two trips were just two of the fun things I got to be part of this summer. There is more to follow, including my own Ferruginous Hawk banding, Great Horned Owls, and also some Turkey Vulture tagging that I got to see.
Posted by Jared B. Clarke at 2:40 PM