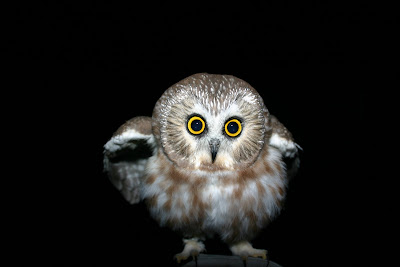 The Northern Saw-whet Owl is the smallest owl we have here in Saskatchewan, and arguably the cutest. This owl breeds in the parkland and boreal forests of the province, and during the fall migrates south. They move south in fairly large numbers, but ask any birder, and they likely have only seen a Saw-whet once or twice in their life, if that. This is because these birds are strictly nocturnal and don't become active until the sun has set.
But ask any Saskatchewan owl bander and Saw-whets are one of the most common owls in Saskatchewan based on numbers banded each year. Until a few years ago, Saw-whets have received virtually no attention here in Saskatchewan. That was until a couple of sharp SK banders decided to bring Saw-whet banding to the province.
This fall there are five different stations in Saskatchewan: 1 east of Saskatoon, 1 at Matador, 1 at the north end of Last Mountain Lake, 1 near Prince Albert, and my station at Edenwold (35 min NE of Regina). This fairly geographically spaced group allows the opportunity to study movements of Saw-whets as they migrate, and that is just what we are doing.

In general, Saw-whet migration runs from the third week of September to the end of October. During this time the peak appears to be around the second week of October. To give you an idea of the magnitude of the migration, last year, the five station in Sask caught and banded over 500 Saw-whets during this period.

Once the birds are in the hand we record a bunch of data. 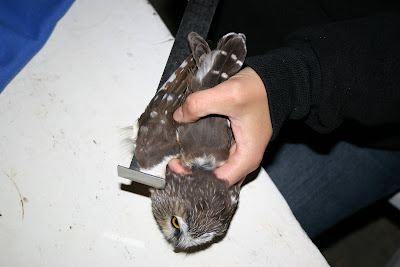 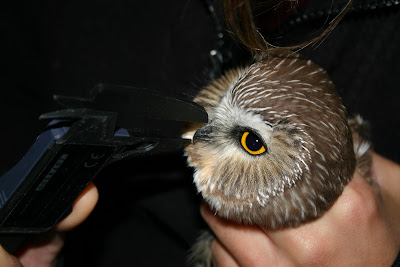 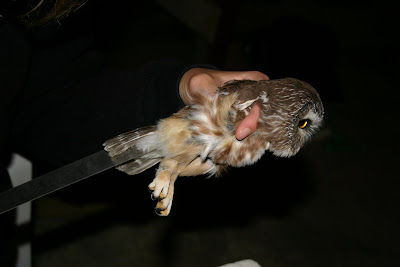 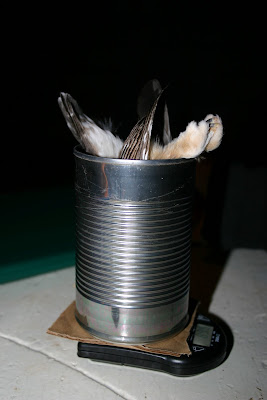 We also record age and sex of each owl, and of course the birds are banded. 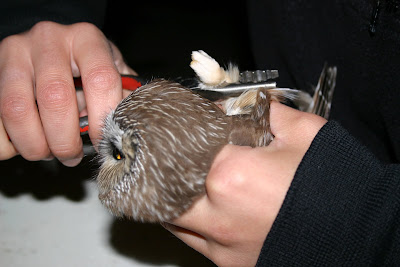 More about Saw-whets later.
Posted by Jared B. Clarke at 9:03 PM

Cool! I never knew they were even HERE in Saskatchewan until I posted a youtube video of one in our backyard in Regina, Sask, and was advised they breed here. http://www.youtube.com/watch?v=OLuYPhGorAo&feature=channel_page

It is amazing how many of these little guys are out there! The women who owns farm where I capture them had never seen a saw-whet there before I started banding, and she had lived there for 60 years! In 3 years I have captured over 504 at her farm!
The thing is they rarely start moving until it is quite dark, so they are less conspicuous and typically go unnoticed.

Hi there. Good to read that your area has had Saw-Whet Owl sightings. This is a bird that I have heard singing away many times in Algonquin Park, here in Ontario. I live in Toronto, and this past Friday, my wife and I came upon an adult Saw-Whet Owl out in the bush. This was the first time as birders that we had ever seen a Saw-Whet Owl. And it only took 50 years! Fortunately, we had our camera with us and got some good pictures and video. We have posted them for anyone interested at: http://frametoframe.ca/photo-essay-northern-saw-whet-owl-sighting