Yesterday, Kristen and I decided to use our family day to go for a drive. Just how far we were going to drive we didn't know, we just knew that we wanted to see an owl of the north.
So we set out at 6:00 am, so we could be in the northern country before noon.
To give a way a bit of the story to begin with, we travelled 1,050 km and made it home to Regina by 10:30 pm. We only spent half an hour out of the vehicle during that time!
It wasn't until we had been searching for four hours, driving for 6.5 hours that we found our first owl, a Northern Hawk Owl! Only the third hawk owl I have ever seen. Kristen spotted it as we cruised along the road. We stopped, and reversed, just in time to see the owl take off, bee-lining it for a large spruce tree. It shot out its legs and tried to take something out of the tree. It dropped down into the bush below, and we never saw it again! Even though it was a quick sighting, we were pleased to have even seen an owl after six hours of driving. 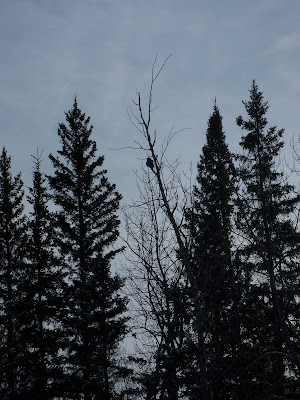 We continued on our way and soon enough (~15 km) we had found another Hawk Owl! We couldn't believe it! This time he sat tight and allowed us to get all set up. 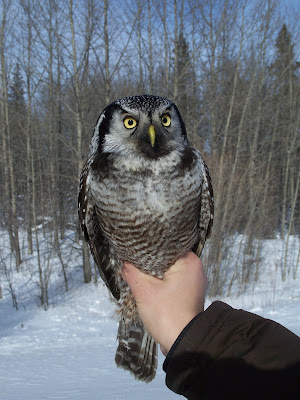 After a little while we had this amazing little owl in our hand!

Onward we went after letting this one fly off, which you can see here.
Our luck was absolutely amazing, we came across not 2, not 3, not 4, but 5 more Hawk Owls during the course of the day!!! We found 7 hawk owls in total. We were absolutely giddy with our luck. There was one slight cause for disappointment (if I'm even allowed to be disapointed after finding 7 Hawk Owls). We had only received three bands specially sized for Hawk Owls before we left on our little impromtu trip and therefore could only band the first three hawk owls. So we only could look at the last 3! I had mentioned prior to our trip to Kristen that I hoped we could find atleast one owl during our trip. I would not have imagined we would find 7, so wouldn't have thought to bring more. Oh, well, we did get 3!
Once in the hand, we weighed the birds and took measurements of the wing chord, tail and culmen. We also assigned an age to it, based on similiar features of the saw-whet owl which I have discussed here before. With a new band around their leg, they are quickly back to hunting for mice in the snow. 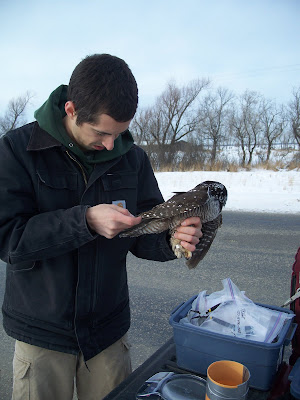 Hawk Owls and Great Grays are highly adapted to catching mice and voles during the winter. We watched a hawk owl yesterday hovering over a bank of snow, and instantly dive deep into the snow, leading with its outstreched talons. He sat there for a second like a toddler that has just been thrown helplessly into a deep snow pile. Then he sprung out of the snow, empty handed and kept on hunting. Most of the time, Hawk Owls use their speed to catch their prey, by plucking them off the ground. These things are amazingly fast, thanks to their more hawk-like wing (better adapted for speed and actually not silent like other owls), which are so fast in fact that the poor little mouse really doesn't have a chance once these owls have them in their sights. 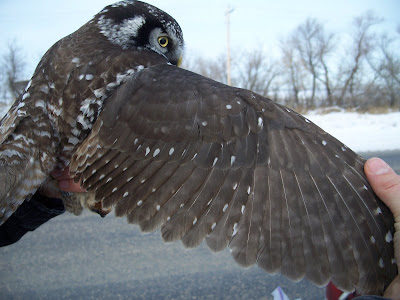 All in all it was a fantastic day! We notified Harold of the 3 owls we saw but did not have bands for, so hopefully he will make it out and find them. Interestly, we didn't see a single Great Gray Owl during the course of our 1000 km trip. Ironically, Harold Fisher tells me he has only seen 3 Hawk Owls in his area this entire winter, so we were very lucky!
Posted by Jared B. Clarke at 7:20 PM

Very cool. Back when I lived down south I used to see Hawk Owls very regularly around Thompson Mb and occasionally near La Ronge.

Good to put a face to a name (seen you posts on Saskbirds often)- and great to know you also involved in raptor research! Good NHOW year in Manitoba this year and some GGOW around too...

Thanks!
I too have seen your name around quite a bit! Hopefully our paths will cross sometime in the future.

Kiggavik,
Where are you living now, if Thompson and La Ronge are south for you!?