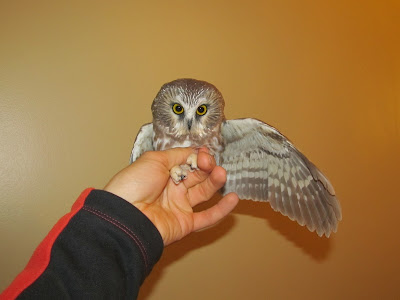 Our first saw-whet owl of 2011
On Tuesday September 20th we pulled out the old nets and got the net lanes cleared in excited anticipation for our 6th year of banding here at Saw-whet Acres! Six years!... I can't believe we've been doing this for six years now.
2010 was a our lowest overall total captures in the 5 years we'd been banding here, so we have high hopes that 2011 will be better.
So far not so....
Since opening on the 20th, our nets have been open for 8 evenings and only captured 3 owls. This is significantly lower than another other year. Here are the numbers from the first day of the season, to October 1st, over the last 5 years.
2006 - 8 nights open - 42 owls
2007 - 8 nights open - 22 owls
2008 - 8 nights open - 49 owls
2009 - 5 nights open - 11 owls
2010 - 6 nights open - 29 owls
2011 - 8 nights open - 3 owls....
My guess as to why the migration has been so slow is the unseasonally warm, or I should say hot weather. This last week we have had up to 29 degrees Celscius on a number of days. The owls just don't seem to be moving yet. With this warm weather we have strong southerly winds, which I believe slows down the birds. The other option is they simply take a different path that is with the wind...
We'll just have to see how things progress this month....
Stay tuned.
Posted by Jared B. Clarke at 8:20 PM