I think I start most of my posts on here by commenting how long it has been since I have lasted posted... I need to post more regularly.

My Canada Goose banding project in Wascana Park is now over and I have decided to close up the Wascana MAPS station this year, so I have a bit of spare time now to work on a different project.  I am excited to share that that new project will involve Ruby-throated Hummingbirds!

At the end of July, 2016 I traveled down to southern Illinois to get the required training to catch and band hummingbirds.  I spent three days with Cathie Hutcheson, an amazing bander.  We traveled around Illinois to her various banding locations where she has been banding hummingbirds for the last 9 years.  Under Cathie's watchful eyes, I got to band 167 Ruby-throats in the three days I was there!  What an experience! 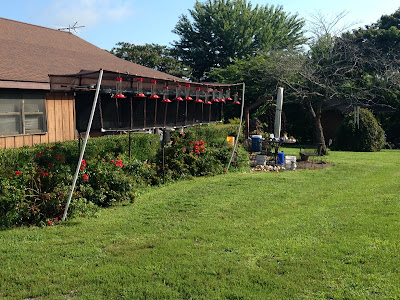 One of the banding locations in southern Illinois I visited in 2016.  There are a lot of hummingbirds in this area!  At one of the sites, the homeowner puts out 5 gallons of sugar water each day!!!!!!!

I now have authorization on my banding permit to be banding hummingbirds here in Saskatchewan starting in 2017.  The project goal is to begin to get an idea of movements and numbers of Ruby-throated Hummingbirds around the Edenwold-Balgonie-Fort Qu'Appelle area.  I plan to visit a number of sites in this area a couple times each summer and catch and band the hummingbirds that frequent the feeders.  Over time, I will get a better understanding of the population of hummingbirds in the area, as well as how the birds move around on the landscape.

Part of the reason I started getting interested in banding these hummingbirds is that at my MAPS station at our farm and on the adjacent Ducks Unlimited quarter, I usually catch 5-7 hummingbirds in our mist nets over the course of the season. 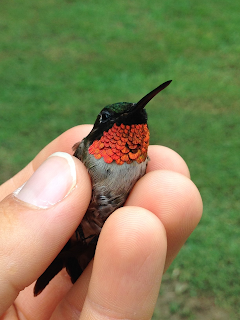 I have started to reach out to folks in the area who feed hummingbirds each year in their yards.  If you have hummingbirds visiting a feeder you maintain around Craven, Edenwold, Balgonie or Fort Qu'Appelle, please contact me to see if we can add your site to my banding locations. 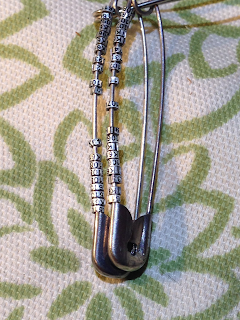 Hummingbird bands come as a sheet of metal and have to be cut out and formed by the bander.  Bands for Ruby-throats are 6.0 and 5.6 mm in length!

This project is pretty exciting as only 1 other bander bands hummingbirds in Saskatchewan, Ron Jensen in Saskatoon.  Last year Ron captured 244 Ruby-throats!  So now just like every other bird, if you find a dead hummingbird, please check it for a band! 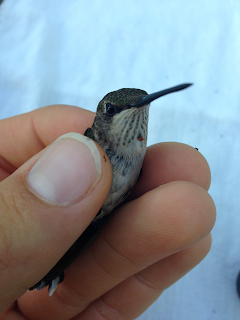 The last hummingbird I banded in Illinois in July, 2016.  See the single red feather on his throat?  This is a young male!  Next year, when he returns he will have a pure red throat!
Posted by Jared B. Clarke at 9:34 PM