In June 2007, Lorne Scott and I went to Morse to band young American Kestrels in nestboxes that local school students had put up in previous years. Here we met the amazing Lori Wilson and Randy McCulloch. After banding the kestrels, I was mentioning to Lori and Randy about how I had been banding Ferruginous Hawks the previous week. The two locals quickly told me about three nests they knew of very close by that they would be pleased to take us to to band.
We made it to the first nest and banded the young with no problems. The nest was in a low (only ~6 feet) Hawthorn shrub. After this nest, Randy had to get home so Lori, Lorne and I continued on our way.
The next nest was the soon to be infamous nest - the Six Pack nest. The tree was dead, but sturdy enough to climb, I felt. From the road (0.5 mi back) we were not 100% confident if this was a FEHA nest or a Red-tailed Hawk nest, since we hadn't seen any adults yet. I decided to take both strings of bands so we could band it either way. I made it up the nest (8.8m above ground) and found FEHA chicks in the nest. So to make less clutter in my pouch I dropped the RTHA bands down. Oops! I dropped the FEHA string!! So I had to hoist up the FEHA bands with the owlovator and began banding the young. At first I thought I was looking at a nest of 5 chicks, but soon realized there was actually a sixth birds sitting behind the fifth chick! 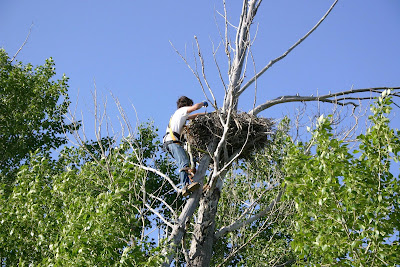 I couldn't believe my eyes!! I had never seen six chicks in a nest before! Of course we didn't bring any cameras out to the nest so poor Lorne and Lori had to walk all the way back to the van and get the camera so we could document this nest. I wasn't sure if this was a big deal but didn't want to miss a photo opportunity like this. 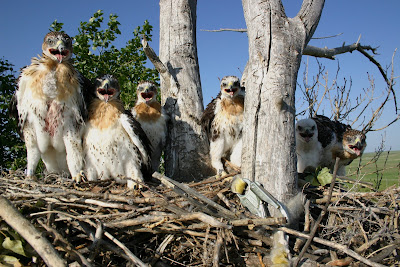 Well it turns out we couldn't find any other published accounts of a nest with six FEHA chicks! This was a first!!
Later in July we returned to the nest and were very pleased to see six fledged chicks take off, one at a time, from the bank of the slough, seen below. We could see they were juveniles and we could see all their bands! They had all survived. In the photo below the nest is on the right side of the tree clump. 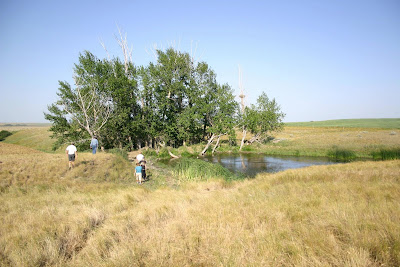 I later wrote up this account and it was published in the Journal of Raptor Research 42:152-153.
Contact me if you would like to read a copy of the published account.
Well, understandably we were quite excited to get back to the six-pack nest this year (2008) and see how many chicks were present.
We met up with the local landowner and his family and made our way over to the nest.
Up the old dead tree I went, (I don't think I want to climb this next year), and we found four good healthy chicks.
We were slightly dissapointed about finding only 4 chicks, but were pleased the nest had still produced this many chicks. It's amazing to think this nest has produced 10 chicks in the last two years!!
I will keep you updated to the story of the six-pack nest for years to come!
Posted by Jared B. Clarke at 2:30 PM