The Ferruginous Hawk (FEHA) is North America's largest hawk and definetly my favorite bird to study!! 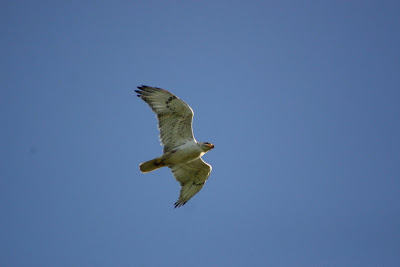 This year FEHA's had an exceptional reproductive year, producing roughly 3.01 chicks per nest. When gophers are abundant (FEHA's favorite food source), which they were this year, FEHA's do very well. A family of Ferrug's have been known to take over 500 gophers in a single breeding season. When you have up to 6 chicks you have to keep all those mouths fed!

This year I banded FEHA around Maple Creek, and between Herbert and Mortlach.
This was the second year of my banding project that is looking at productivity and long-term territory use by FEHA in the Bitterlake area (NW of Maple Creek). For this trip Adam Crosby and Joseph Kotlar joined me and we had a blast. 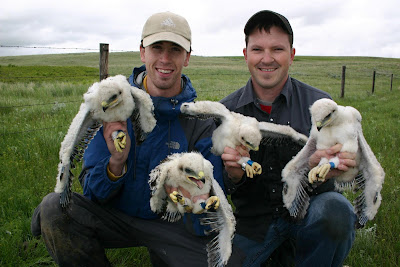 In this very defined area we banded 77 FEHA nestlings.
One new element to this study is this year we banded the chicks with the regular aluminum bands but we also placed blue aluminum bands on the left leg 0f all the chicks. I hope to collect disperal data by banding with the blue bands - in other words, we know were the chicks grew up, how far away are they found as adults nesting? If one sees an adult with a blue band, we can tell you it came from a very small area and see how far away it is.
Lori Wilson, Randy McCulloch and Lorne Scott also help me find nests in the Herbert/Morse area and of course helped band. 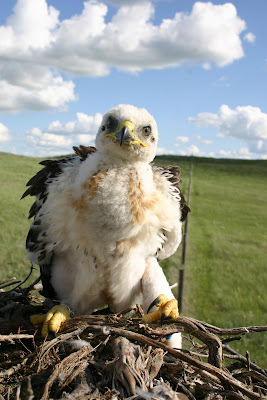 In total I banded, with the help of many voluntters a total of 222 Ferruginous Hawks this year. Thanks to all the folks who help find nests, and band these great hawks.

Below is a dark phase adult FEHA we found at a nest near Piapot, SK. Both the adults at this nest were the dark phase colouration (aka - melano adult). Can you see the aluminum band on the birds right leg? (I know the photo is small but it is banded). This was the second year we found a banded melano adult at this nest, which means that this same bird was here two years in a row. 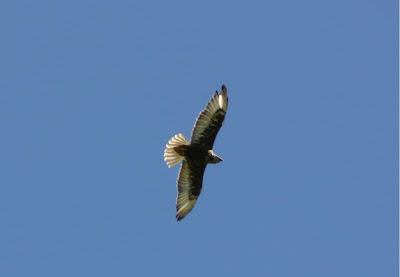