Normally, I have raptor banding stories. Today is a little bit different.

Earlier this spring I took a job with Wascana Centre Authority in Regina. This is the organization that looks after one of the largest urban parks in North America, Wascana Park.
I am the new year round Park Naturalist at Wascana Centre.

I am involved with everything that is wildlife related. One the most enjoyable parts of my job is teaching people about the environment right in the middle of our city. Watch for the interpretive program at Wascana to take off in the next year! 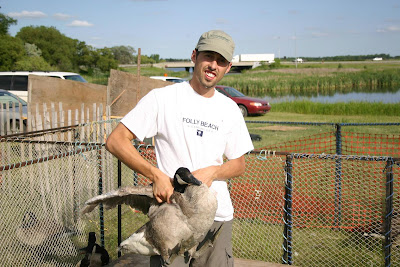 But enough about that. Another part of my job is trying to manage the Canada Goose population in Wascana Centre. Canada Geese (CAGO) love the park. It is relatively predator free during the breeding season, except for a few ambitious mink and a couple of foxes. But also there is a lot of food (ie grass) and people love to feed them! This equates to a whole lot of geese nesting in the park, raising a whole heck of a lot more geese that tend to survive each year. In a more natural habitat, many of the young birds would not survive, whereas almost all of the young survive in the park. 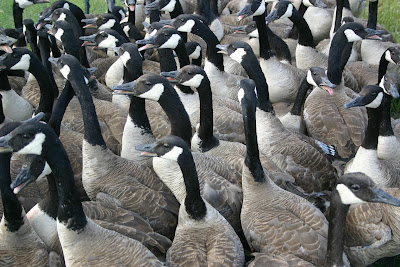 To help mitigate the goose population and reduce the number of human/goose conflicts we move a large majority of the birds up north. This year we moved ~908 CAGO up to Cumberland House Lake, roughly 7 hours north of Regina. Because the birds are flightless at this time of year we can gather up large groups of the birds and transport them to a different location.

To learn more about how many geese return to Wascana from Cumberland House next spring we banded all 900 geese! What a job! It turned out to be a lot more work then I expected. Each goose must be age, sexed and banded. Geese, like all other waterfowl, are unlike all other birds, in terms of their sex organs. All birds have a cloaca, a hole at the end of their digestive tract that serves as an excretion point for feces and urine, but also an exit or entry point for sperm. In most birds the males cloaca simply swells to aid in depositing his sperm. In waterfowl, however, males actually have a penis, that can be popped out of the cloaca and used to pass sperm to the female.
To end this story, each goose must be turned up-side down and examined to see if it has a penis or not.... Now I will reiterate, we sexed, aged and banded over 900 geese for the round up!!!

We also have been catching and banding some of the ~200 birds that were left in Wascana after the round-up. We hope to get a better idea as to which birds have a great return rate, birds we took to Cumberland House or those left in Wascana. So far we have banded 1069 Canada Geese from Wascana Centre! But just today I still saw some birds without bands! 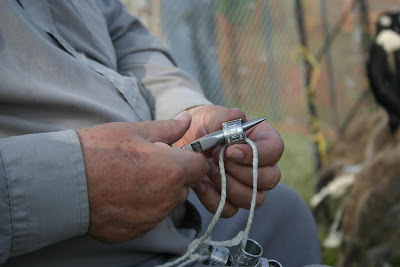 We use a size 8 band on the Canada Geese we have here. This is the same size as a Great Horned Owl or Great Gray Owl. The difference is though that we do not use a lock-on band like we do with raptors. This is because CAGO do not have a bill capable of removing the band, so we don't have to worry about the lock-on part. Geese legs are more narrow and long and we actually mis-shape the bands slightly to allow for a more comfortable fit. 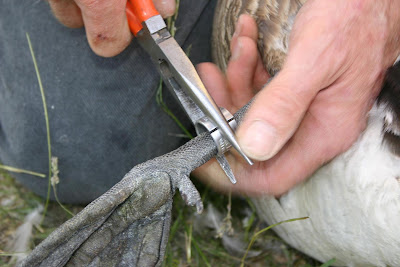 The geese used to be banded years ago as part of the round-up, but banding ceased in 1993. Ironically, earlier this year I noticed a banded goose inside the Display Ponds (the fenced area just east of the Conexus Art Centre). I convinced a few kids who were feeding the birds to feed this particular bird and I was able to read the band number off its leg. It turns out it was banded in 1993 as a young bird, incapable of flight. That makes that bird 16 years old! Interestingly, we have not encountered that individual while banding the 1069 geese this year! Where did she go? Does she know to get out of the area for round up? Interesting stuff.

So the next time you are walking around the park and see a Canada Goose, think about the fact that that bird might just over 20 years old! Lorne Scott's oldest recovered goose he banded was 28 years old when it was found!!!
Posted by Jared B. Clarke at 10:11 PM