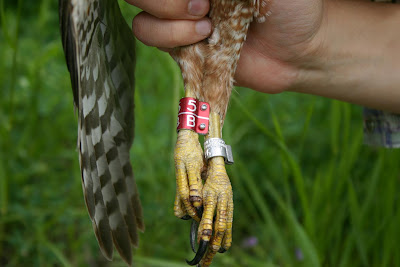 Cooper's Hawk banding season always comes fast and flies by! We have a fairly short window of opportunity to band the birds because they leave the nest in only 28-34 days! We like to have the young birds old enough that you can precisely sex them, but not too old that they leave the nest prematurely. 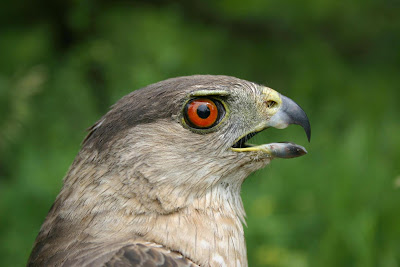 2009 proved to be our best year so far in terms of the number of Cooper's Hawks banded for this project. Due to the loss of our owl earlier this spring, after never fully recovering from his initial injuries that brought him into human care, we were forced to use a mounted Great Horned Owl.

Using this mounted owl I was amazed when we caught 13 adults at 9 nests. I think the trap failed only three times, when the birds were able to detect the net and refused to come in close enough to the trap. This surpasses all of our previous years of banding adults by far! I think our highest number of adults in one year was 6. 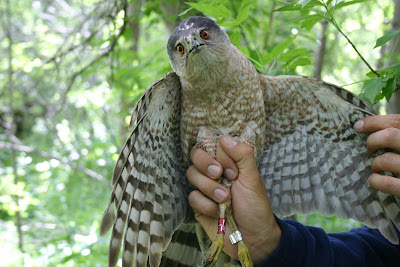 We did not find anything unusual in terms of brood sizes or anything like that. None of the adults that we caught were banded.

We did have three re-sightings of birds we banded in previous years. As posted earlier 0/K returned to Wascana Centre again this year for his 4th year here. He and his still unbanded mate raised 4 young chicks, who I saw all yesterday all out of the nest. I will post more on their progress in the next couple of weeks. The female we banded near Craven last year returned for here second year since we banded her. Her leg was too big to put the colour band on her, but we were able to see her aluminum band on her left leg and are confident this is the same bird. Lastly, the female we banded down near Roche Percee last year returned for her second year since we banded her as well. We initially thought that she had been unable to attract a mate this year but turned out just to be a late nester. We did catch her mate this year though.

We banded Cooper's in Moose Jaw, near Mortlach, Regina, Craven, Estevan, Saskatoon and near Prince Albert. So make sure you watch for red colour banded Cooper's Hawks!!! And if you see any please contact me!

A special thanks to the folks who helped find COHA nests and helped us band, including Kathy Hedegard, Larry Preddy, Rocky Marchigiano, Martin Gerard, Marten Stoffel, and Harold Fisher! 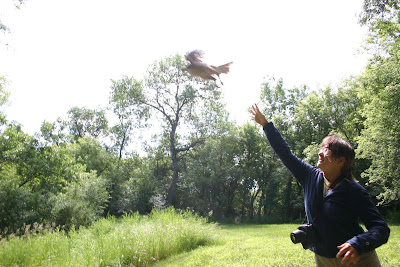 (Kathy releasing a Cooper's Hawk)
Posted by Jared B. Clarke at 10:09 PM