Its a Turkey Vulture with a green tag!!!

Last week my banding buddy, Kelly Kozij from Weyburn, sent me an email of a photo he had received of a large black bird with a green tag on its wing.
Well what do you know, it was a young Turkey Vulture with a green wing tag! How exciting is that!!

Deanne Miller-Jones initially saw the bird as it perched on the top of a light pole in her farm yard near Radville, SK, on Oct 15. Deanne snapped a few photos of the bird, but wasn't completely sure what she was looking at. After the email was passed around a bit it became clear that this was one of the Turkey Vultures tagged by Stuart Houston's crew this summer! Can you make out the tag on the bird below? 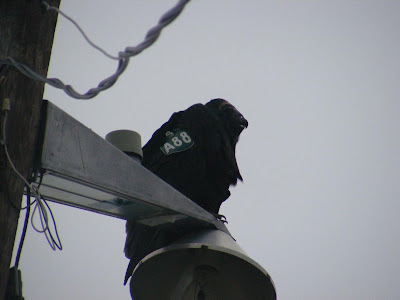 Deanne has graciously allowed me to post her photos here. Thanks Deanne! 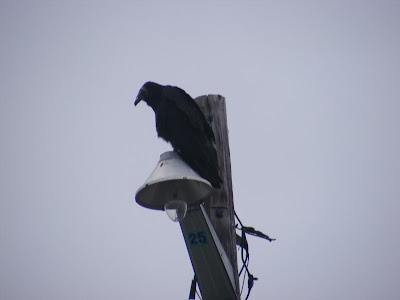 The bird remained on the light pole for the entire night and departed the next morning around 10:45 AM.

After consulting with Stuart Houston, I found out that this bird, A88, was one of the last birds his crew tagged this fall. It was tagged NW of Hagen on the 30th of August, 2009. It was one of two young vultures found in the attic of an old shed. This nest site was used in 2004 and 2005, but apparently not again until 2009.

The distance from the original tagging site and Deanne's farm was 385 km. Deanne's keen eye is a example of how citizen's can assist in a research program. Without Deanne's report of this bird, this information would not have made it to Stuart and we couldn't have learned what we have learned (ie. that this bird has survived to now, survived the 4 inches of snow that was here for a few days, is still in Saskatchewan, traveled this far this quickly or slowly..., etc). Thanks Deanne for your report and thanks to Stuart Houston for the information regarding this bird.
Posted by Jared B. Clarke at 2:39 PM