With only about 28 Northern Saw-whet Owls captured to date, we still did manage to net this little guy on the evening of Oct 12. The exciting part about this bird was that it was already wearing a little aluminum band!! 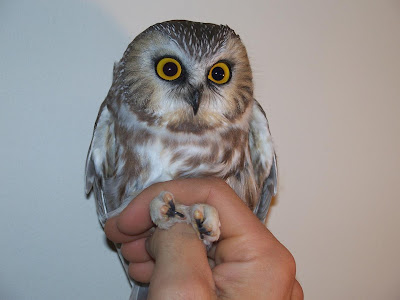 After submitting the data to the recovery website, (www.reportband.gov) I learned that this little guy was banding in Ontario, on Sept 22, 2007!! But that is all the detail I know at this point.

Two years ago I captured a bird from Thunder Cape Bird Observatory which is just east of Thunder Bay. The band number was only 400 bands away from the band number of this guy, so this bird likely was first banded at TCBO! This will be the second owl I have captured from their site! I don't know if this is the location where the bird was actually banded but this is my guess. Time will tell.

Looking at the molt pattern on the wing, we aged this bird as an After-Second-Year bird. You can see the different feather generations I have marked on the wing. 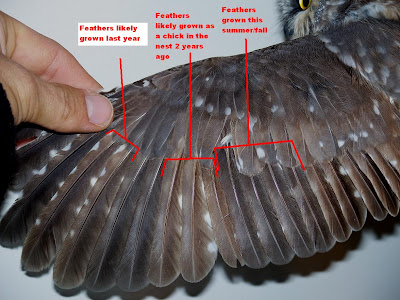 I will keep you posted if I find out any more information.
Posted by Jared B. Clarke at 12:12 PM

Jared: Are you using UV light to check moult on the underside of the wings?