We completed the 2nd session of the Wascana MAPS (Monitoring Avian Productivity and Survivorship) station this morning.  It was an average morning in terms of total captures.  We banded 36 new birds and recaptured 16 previously banded birds.  Seven of the 16 recaps were those we banded in the first session 12 days ago, and the other 9 were from previous years (2 of which we captured last session as well).  We also captured the first young of the year today - 1 young Robin and 1 Song Sparrow.

Interestingly, we have been catching a lot of Red-winged Blackbirds (RWBL).  So far in the two sessions, we have banded 30 birds and recapped 3 birds from previous years.  RWBL have been our fifth most common species captured over the last five years (a total of 145 have been banded) and on average 29 birds each summer.  So we have already surpassed that this year in only 2 sessions.  Surprisingly, one year old males (SY males) are making up the vast majority of the birds we are capturing.  I am not sure what this means exactly, in terms of why they are so abundant here this year.  These birds typically do not hold territory at this age, as they lack the impressive black and red plumage to impress the females and compete with older males.  So they are just hanging around and learning it seems.

The water level is amazingly low this year in Wascana Marsh, compared to all other years we have been banding.  This seems to have impacted a few of the marsh species.  For example, we have not heard any Marsh Wrens this year, and very few Sora's are present - today we only heard one call once.

The recaptured Baltimore Oriole from 2012 was a first for our station!  We have never recaptured a Baltimore Oriole before, let alone one from 4 summers ago!  This female must have had success raising young in the HCA to be returning.  She was aged as an adult bird when originally captured meaning she is at least 4 years old now.

During each MAPS session we record all species of birds observed as well as noting their particular behaviour to suggest whether they are breeding in the area or not.  For example, birds only carry food in their bill if they are returning to feed chicks, so if we see a Gray Catbird carrying food, this suggests they are nesting somewhere in the area.

To date we have observed 94 species in the Habitat Conservation Area, during the MAPS program (from June 10 to August 9) from 2010-2015.  We were excited to add the 95 species documented - a Green Heron.  This is a rare visitor to Wascana Marsh and it was the keen eye of Kim Mann who picked that one out!  Here are some long shot photos to confirm its identity! 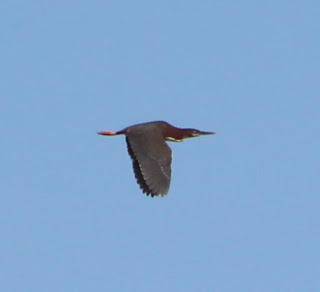 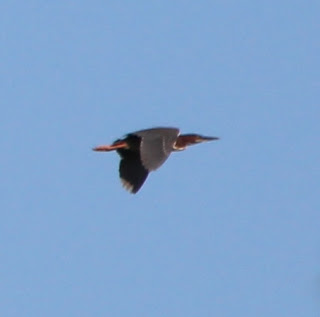 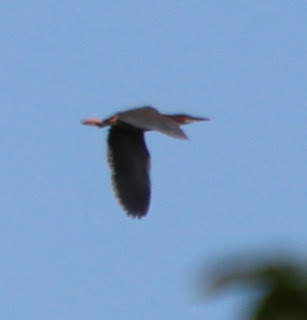 1st young Robin we captured this summer
Posted by Jared B. Clarke at 10:59 PM