I could barely believe what I was reading a few weeks ago when I got an email from Robert Benson, from Texas.  Robert emailed me with details on an American Kestrel his PhD student Carter Crouch had captured in south Texas.

On June 30, 2015 at a bird house in Moose Jaw, Saskatchewan, my family and I banded a family of nestling kestrels.  There were 5 young kestrels in the box, 3 males and 2 females. 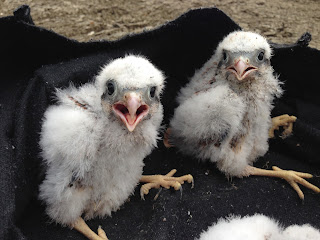 Two of the young kestrels from the Moose Jaw nest box banded on June 30, 2015.

Robert's email outlined that on November 29, 2015, Carter had caught a young female kestrel that I had banded in Moose Jaw.  She carried band #1623-44426! Amazing!  The distance between her nest box and her winter territory is 2,553 km! 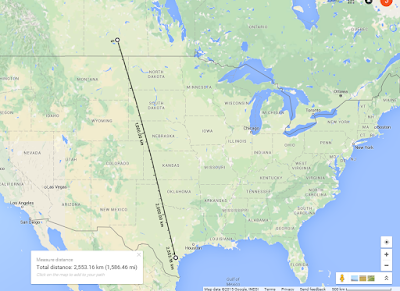 A screenshot from Google Maps showing the distance between the banding location and the recapture location, 2,553 km.

Carter is doing his PhD on wintering home range (how much area kestrels use to hunt, etc. in south Texas?), survival and site fidelity (do the birds come back to the same spot each winter?).  During the winter of 2014, he captured 34 kestrels and colour banded the birds so they could be easily identified using a spotting scope.  He then observed the birds on a regular basis to see how far they moved during the winter months.  This winter (2015), over 50% of the birds have returned back to their same territories as in 2014!

He added 3 colour bands to our kestrel so she could be part of his study.  In addition, he added some non-toxic dye to her breast feathers to also help identify her from a distance. As of early December, Carter had observed her 10 times along the same 500 m stretch of road and she is typically within 100-200 m of where he caught her! 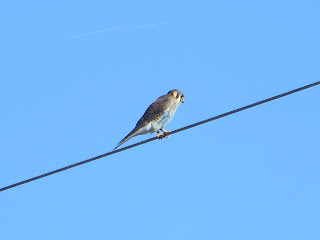 1623-44426 with her new colour bands back at hunting for prey! Photo credit Carter Crouch. 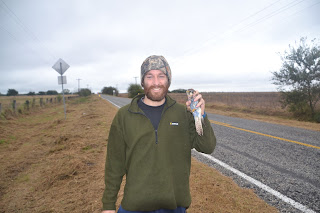 This recapture is so exciting because, despite the large number of kestrels that have been banded over the years, very few direct recoveries from a nest box to the known winter ground exist.  This is a very rare find.  But one that draws a direct line between Saskatchewan and Texas!

A google street view of the exact coordinates of where Carter captured 1623-44426 in south Texas.

All I can say for sure, is Carter will be watching for her return next winter.  And my team of banders and I here in Saskatchewan will be eagerly opening our nests boxes come spring hoping to find that little kestrel with three colour bands on her legs and one metal band sitting on her first clutch of eggs.

To read more about this kestrel check out Robert and Karen Benson's blog post.

You can also read more about our American Kestrel nest box study.

Great story! Thanks for sharing. Do you band the kestrels that nest in the box near Rainbow bridge? We are thinking of putting up a kestrel box on our property. Any tips on where to locate it? I'd hate to lose too many goldfinches!

Hi Wendy! Yes the nest box near Rainbow Bridge is one of mine I set up in 2007. I have a kestrel box for your property in my basement! It would be wonderful to have this box as part of nest box study. I can come over put it up for you. Kestrels do take some small birds, but predominately small rodents and insects so I wouldn't be too worried about the goldfinches.