Many people from around Saskatchewan are familiar with a small falcon that commonly nests in urban centres, high up in spruce trees, and gives an ear piercing keekeekeekeekeekee call.  This bird is called a Merlin.

However, this blog post is not about Merlins.  This blog post is about its smaller cousin the American Kestrel.  Most people are not familiar with this brilliant coloured falcon as it doesn't often chose to nest close to people and is often overlooked, as it is roughly the size of a Mourning Dove.  Yet, once a person has actually had a chance to see how vibrant these little birds are, its difficult to forget about them.  That's been the case for me, anyways.  Males and females look different, a phenomena I have mentioned before with Yellow-headed Blackbirds, sexual dimorphism.

In Saskatchewan and across all of Canada, the American Kestrel's population has been declining for at least 40 years now.  According to Breeding Bird Survey Results from southern Saskatchewan, each year their population declines by 2.19% on average.  That means in the last 40 years, there are less than half as many kestrels in Saskatchewan compared to 1970.

It seems we are regularly reminded by news stories about how there are far fewer animals today than 40 years ago.  Our default tends to be thinking about elephants, lions and rhinos across the world in peril, and we forget about wildlife right here in Saskatchewan which are hurting just the same.  The American Kestrel is one such species that is hurting. 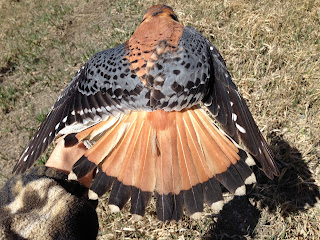 Back and tail of a male American Kestrel

Kestrels are cavity nesting birds, meaning they rely on naturally forming cavities or old woodpecker holes to lay their eggs in and raise their young.   Because they only nest in cavities, if they can't find nesting sites they won't nest in that area, even if the habitat is acceptable in other ways.  Thankfully though, kestrels also regularly use nest boxes, so we can provide nesting cavities if they have been lost. 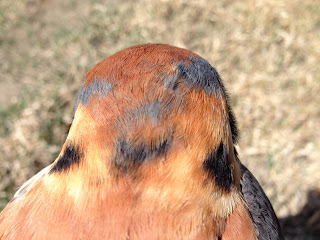 Back of the head of a male kestrel

To learn more about American Kestrels in Saskatchewan, myself and a team of banders (Joe Kotlar, Randy McCulloch, Adam Crosby and Matt Tokaruk) have set up a nest box project.  Besides the Breeding Bird Survey, no other systematic population survey occurs in southern Saskatchewan on kestrels.  Therefore, this project has two objectives, 1) to provide nest boxes for kestrels in suitable sites in southern Saskatchewan to help increase their population given their declines and 2) to regularly monitor the nest boxes to determine kestrel-specific population fluctuations.

We started this project in 2015.  Using the National Audubon Society American Kestrel Nestbox plan we made all of the boxes the same so that comparisons could be made between locations.  This first year, we set up 5 different locations, close to where each bander is located.  These areas are near Edenwold, Herbert, Nokomis, Prince Albert and Saskatoon.  Each location has a cluster of 10 nest boxes, that are at least 2.4 km apart.  They are set up on trees, poles, and buildings.  In total, 50 nest boxes were available for kestrels. 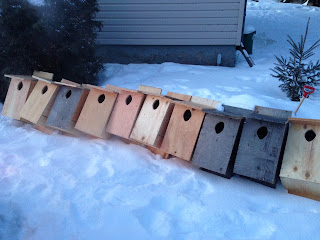 Our occupancy rates during 2015 where much lower at each location than expected as can be seen in the table below.  Only 3 nest boxes (6%) were occupied in total and only 2 nests successfully fledged young.  This was much lower than expected.

My hunch for why our occupancy rate was so low may be that male kestrels scout next years territory in the fall prior to or during migration.  Four of the 5 locations did not get the boxes up until a month before kestrels returned to Saskatchewan in spring 2015.  If males scout in the fall, perhaps our boxes were not set up in time.  We shall see if we have better occupancy in 2016...  It would be interesting to set up cameras at nest boxes in the fall and see if any kestrels stop in and investigate the boxes then. 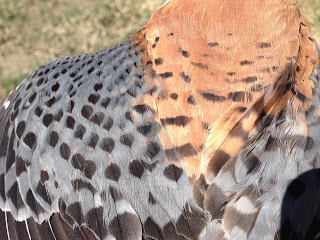