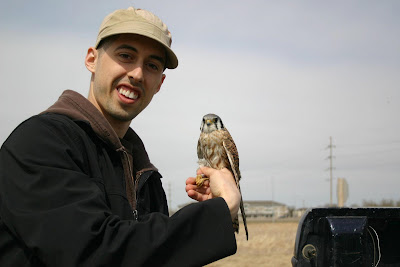 The American Kestrel is Saskatchewan's smallest falcon. It is a very flashy bird. Male kestrels have blue wings and a finely blotted chest, whereas females have dark rusty red back and wings, and a brown streaky chest. 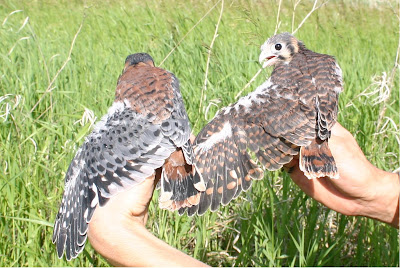 Kestrels are neat because they raise their young in cavities - usually old woodpecker holes. This means that you can attract kestrels by putting up bird houses.

And this is exactly what I did last year. With the help of some friends, I place 9 kestrel boxes around the outskirts of the city. 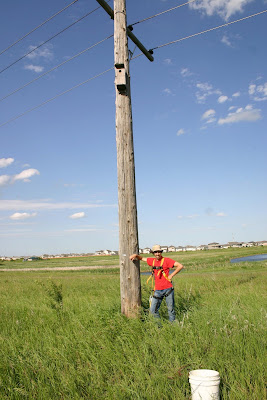 Early in April I had seen activity at only 2 of the 9 nest boxes.

When I visited the boxes to band the kestrels early in May I checked all of the boxes to ensure that I did not miss a box being occupied. To my surprise I found 7 of the 9 boxes were occupied!!

When we opened the boxes we found females sitting on typically 4 or 5 eggs, a standard clutch size for this species. 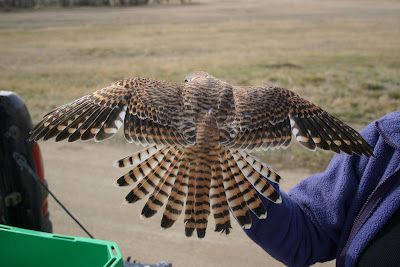 All of the boxes fledged atleast 1 chick, none of the nesting attempts failed in the 9 of these boxes around the city. Two boxes that were occupied at Edenwold and Assiniboia were depredated by raccoons. If you are going to erect a kestrel box, it might be a good idea to put a predator guard below the nest to prevent raccoons from access the nest. The raccoon pulled the adult female kestrel right out of the box and killed her. 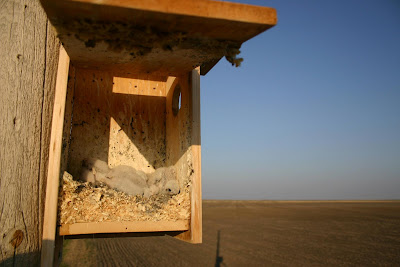 Overall, though the kestrels appeared to do quite well around Regina this year.
Posted by Jared B. Clarke at 10:35 PM 1 comment: