So here we are already half way through June!  Amazing how time seems to fly.
As an update to the Snow Bunting post made months ago, the snow never really materialized here in Saskatchewan in certain spots and we therefore did not have the opportunities to catch Snow Buntings!  Zero SNBU captured... Alas we await the snow... but hopefully not that soon.

However, on June 12th, 2012, myself along with a dedicated crew of volunteers got the mist nets open for the first session of the Monitoring Avian Productivity and Survivorship station in Wascana Centre.  This is the third season that we have been running this program in the Habitat Conservation Area within the Centre. 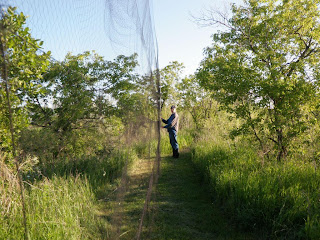 (Bob fixing up one of the mist nets)﻿

It was a fun morning with 51 new birds captured and banded, as well as 5 recaps (birds that already had bands on their legs, from previous years).  Here is the list of species and totals from Tuesdays banding.  To see the banding results from 2010 & 2011 check out Wascana Centre's website. 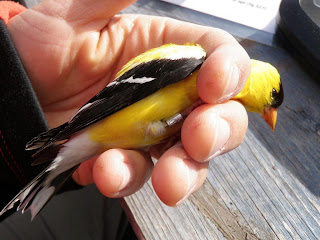 Another one of our recaptures was a Gray Catbird, that was banded on August 3rd, 2011 as a recent fledgling.  When we captured it on Tuesday last week, it was sporting a rather large cloacal protuberance - suggesting that it is an actively breeding male this summer! 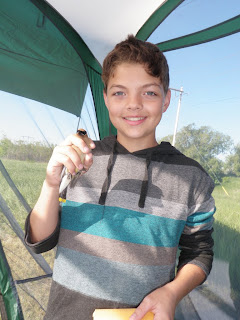 Here's Duncan with a Cedar Waxwing. 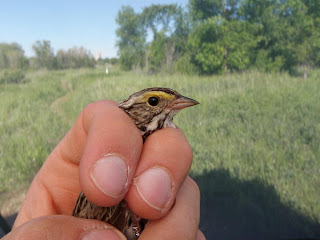 An adult male Savannah Sparrow.  Only the second SAVS captured during MAPS (2010-2012).
Our next banding session is scheduled for later this week.
Posted by Jared B. Clarke at 1:07 PM 1 comment: