On 13 October 2008, Kristen and I were very surprised to find the bird below in our nets... a Boreal Owl!! This owl is normally found much further north in the boreal forest and we never imagined we would catch one of these at Edenwold! We were very excited.

Boreal owls are slightly larger than Northern Saw-whet Owls, as you can see by the photo, but interestingly this bird weighed less than a few of the larger saw-whets we have caught this year! Boreal owls mass can range from 90-200 g (this one was 109g) while saw-whets range between 75 to 120 g (that I have caught). 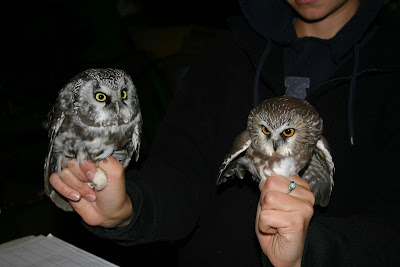 Based on measurement and the lack of a moult limit we think this was a young male. We are not sure why he was down near Edenwold at this time of year but were very pleased we were able to see this guy. This was the first Boreal Owl I had ever seen!
Posted by Jared B. Clarke at 10:48 PM 1 comment:

This fall we began our third season of capturing saw-whet owls near Edenwold. We began this year on Sept 22 and have been banding every night with good weather. 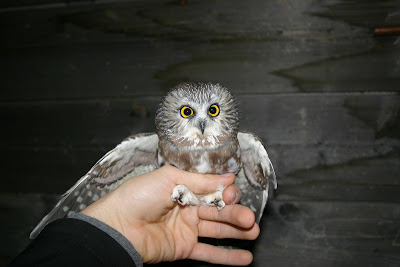 We are attempting to capture these small owls as they are migrating through the area. We arrive at the farm we are banding at around dusk and open the nets and start our caller. The birds are attracted to the call we broadcast and come into see what is going on. The birds then fly around and get caught in the net. We usually keep the nets open and audiolure calling until about midnight. 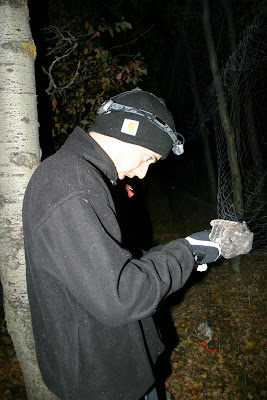 To date we have captured 132 owls this fall. This is down from the last two years, which is likely due to the fact that we missed 7 days straight of banding during peak migration time.
The highest number of owls I caught this fall in one evening was 20 owls. The lowest was 0. 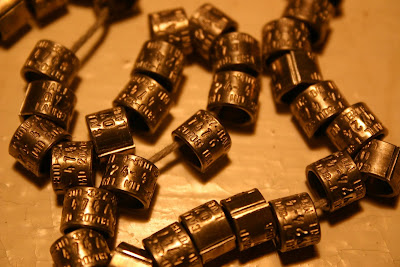 This year Kristen, my girlfriend, has been banding at another site ~5 km SE of my site. She has been banding for about half the time that I have spent at Edenwold this fall. So far she has captured 57 owls this fall, which demonstrates that a lot of owls are moving through this area!!
More results to come!
Posted by Jared B. Clarke at 9:39 PM 1 comment: