Over the last two weeks we have been crossing all over southern Saskatchewan banding Ferruginous Hawks. This is my favourite time of year!!! 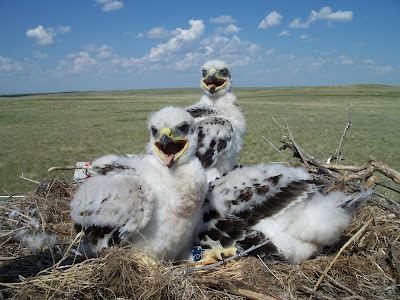 I have not crunched all the numbers yet, but preliminary results suggest that FEHA are doing quite well this year! We are finding a number of nests with 5 chicks, which is a big clutch for any hawk! 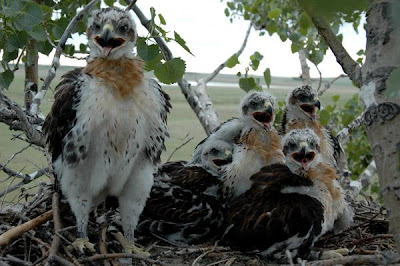 Last year we placed blue aluminum bands on FEHA in the Bitterlake/Maple Creek area. This year we are placing alpha-numeric blue aluminum bands on FEHA from Maple Creek to Estevan. These bands allow us in future years to be able to identify our banded birds using a spotting scope or binoculars. This year we have noticed 4 banded adult FEHA's. If these birds had alpha-numerics on their legs we would know where exactly where and when they were originally banded. To find out where these birds were banded we have to catch them, which is not easy! 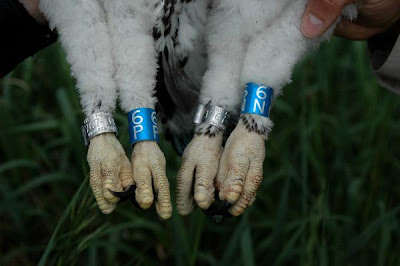 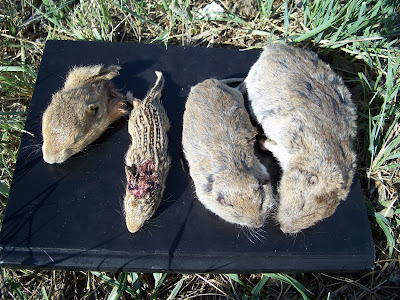 Here is one of the more interesting nests we banded at this year. We found this nest in 2008 and it was active again this year.

There will be more to follow on Ferruginous Hawks.
Posted by Jared B. Clarke at 9:24 PM No comments: 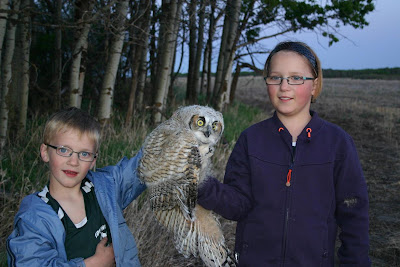 (My cousins, Rylie and Hunter, holding a young Great Horned Owl)
This post is a little bit late, but I hope you will all forgive me.

For the last few weeks we have gotten out to a few Great Horned Owl nests to check how many chicks were in each nest and band the young birds. Along our way we met a number of great landowners who were genuinely interested in the owls that were nesting in their yard or on their land.

This year I decided not to do very much Great Horned Owl banding, but instead have focused more of my time on searching for Ferruginous and Cooper's Hawk nests. This has actually worked out for me since I have found many more Cooper's nests than I have in previous years.

One thing we have noticed from the few nests of GHOW's that we banded this year, was they were fairly late in their development compared to last year. Chicks should be able to fly by now and many of the nests we visited still had a week or two before that was going to happen. So it would appear the harsh winter, and cool wet spring delayed the bird's nesting schedule.

A special thanks to a few folks. A family just south of Regina phoned me about a month ago to let me know they had an active GHOW nest in their yard. The two young girls of the family were very excited about the owl nest and kept close tabs on the young owl. We got out to band the little guy a couple of weeks ago. The girls got to hold the owl after a little bit of encouragement and were surprised at how soft it was. The family also noted they had had very few mice around their yard, supporting the fact that GHOW are great micers! 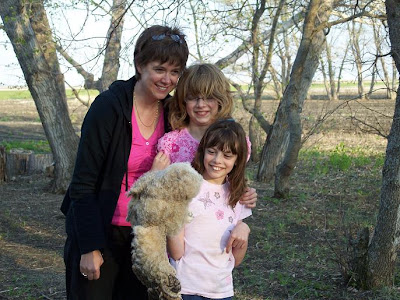 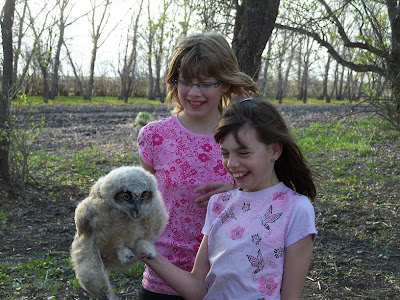 We also met two landowners down in the Riceton area who led us to two nests in their area. We were able to capture the 3 chicks in two nests and band them. 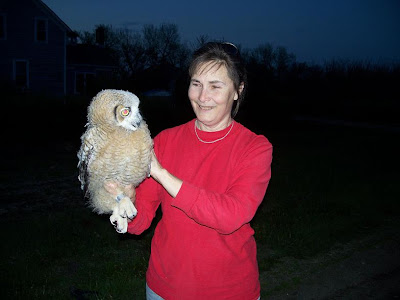 Lastly, I made it out to Herbert to band a few owls and a kestrel with the outdoor education class offered at the school. This is the same group who visited me for Saw-whet banding last fall. We had a great time catching a few birds. I think all the students enjoyed the outing, despite their reservations at first.

Thanks to all the people who helped find nest, watched me climb trees (ready to rush me to the hospital!) and just shared their enthusiasm with us of these great hunters of the night.