It's been a while since I have last posted on here.... It's been a crazy and wild summer. Up to now I have banded 418 raptors. It's been great, but busy nonetheless.
Over the next few weeks I hope to post numerous times here to fill you in on the events of the summer.
Lets start at the beginning.
Great Horned Owls 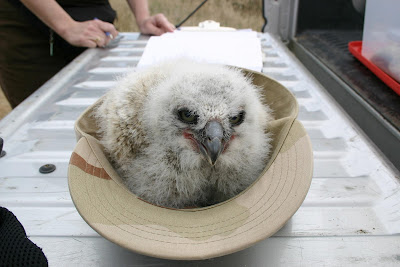 We started banding on May 3 and finished banding owls by the end of May. We have caught a few more owls since though.

Our first weekend we spent in Herbert and Morse banding with Randy McCulloch and Lori Wilson. Joseph Kotlar accompanied us for the weekend as well. We had a good weekend, checking 29 nests and banding 47 chicks. Our little adventure that weekend even made it into the Herbert newspaper!!

During May we banded around Regina, Indian Head, Moose Jaw, Chaplin, Craven, Dilke, Carnduff, and Pense.

We found one nest of 4 chicks, but most had a regular sized brood, 2-3 chicks. 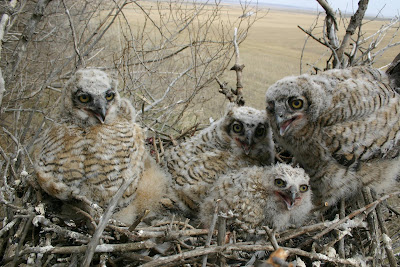 Some interesting prey items we found in owls nests included: a Virginia Rail, Northern Pocket Gophers, a Short-eared Owl, a Long-tailed Weasel, and a number of Cottontail Rabbits. One nest was jam packed with prey - 2 Eared Grebes, a Gray Partridge, and American Wigeon, and an American Coot. While another nest had remains of a Short-eared Owl, Lesser Scaup, Green-winged Teal, 2 Blue-winged Teals, and a Northern Pocket Gopher.

This year despite visiting over 65 nests I was not struck by an adult owl. Last year I was hit 3 times at different nests but this year I was not so lucky! I did have some close calls. One female trapped me up in the tree as she made repeated striking attemptings when I tried to climb down an open portion of the tree.

Our most exciting event from GHOW banding this summer would have been on May 4. Joe Kotlar was climbing and banding a nest that contained 2 nestlings. Joe was up in the nest attending to the young, while the female owl was very curious as to what he was doing. At one point she landed within 5 feet of Joe and then flew off. Then a few moments later she came back in and landed within 3 feet of Joe. So I yelled "Joe grab her!". And well.... that's exactly what Joe did. In one shot Joe, like a flash of lightning reached out and grabbed the adult owl in a perfect banders grip around her feet - completely immobalizing her dangerous set of weapons. I couldn't believe!!!

He had actually grabbed the owl! He called down "Jared I can't move, if I do I might lose her." So absolutely pumped on adrenalin I scaled the tree in a few seconds without any gear and took the bird from Joe and placed her in a nap sack, with just her legs and tail sticking out. In the dark like this, birds will calm right down and their stress level decreases (Think of the hood a falconer puts on his falcon - same idea).

Well we are all very excited with the catch. I have never caught an owl like this before, granted I have heard of it being done before by other banders. So get the bird out of the tree and go back to the truck with Lori and Randy and we get all the gear out for banding her, while Joe finishes up in the tree. After a few moments I leave Randy and Lori with the bird and go see how Joe is doing. Randy and Lori soon follow and we discuss where we are going to take our picture with the owl. Joe jumps out of the tree and we celebrate his epic grab! We turn back to the truck, when Lori says "Did an owl just fly from the truck?????"........

I had seen it out of the corner of my eye as well. We rushed back to the truck and sure enough, there lay the empy backpack. No owl. She had escaped..... I couldn't believe it! I think I cried myself to sleep that night. ;)

So the lesson learned here is, under no circumstance, leave a bird unattended!!!!!
It was a hard lesson to learn that day, but a valuable one nonetheless.

Once all the bands were tallied, 141 Great Horned Owls are wearing aluminum bands thanks to me and a number of helpful people who joined me on our adventures.

Remember, if you see a dead bird, or are handling a live bird check for a band! 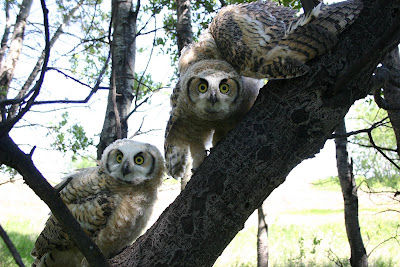 I just wanted to thank you on behalf of all the birders out there for having website where we can be updated on all your adventures. You are the most dedicated,passionate, and knowledgeable freelance ornithologist that I know. Keep on banding those birds and I will always keep my eye out for bands. And if you ever need help, I am just a phone call away.

Great job on banding all those birds this year and great story about capturing the owl.