One of my fearless scouts in Morse observed a pair of Ferruginous Hawks on Mar 15, the earliest sighting this year, and a day earlier then the first sighting in 2008.
Lori Wilson observed these birds at a nest that has been used for many years and has fledged a lot of chicks! However, the nest that has been used for so many years appears to have fallen out of the tree sometime this winter or earlier in the fall!

Already these two birds are rebuilding a new nest, and building quite rapidly at that. Lori described and photographed at least one of the birds flying to a live poplar tree, breaking off branches and flying back to the nest with these branches. In just a day the birds had already made an impressive start to the nest! (seen below) 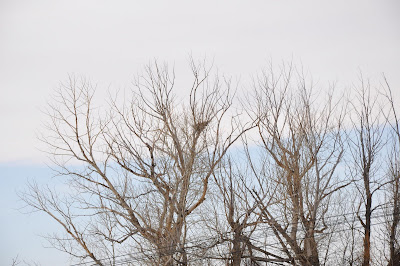 Within a couple of weeks, most, if not all, of the Ferruginous Hawks will be back in the province and another summer will be upon us!

Thanks to Lori for the photos! 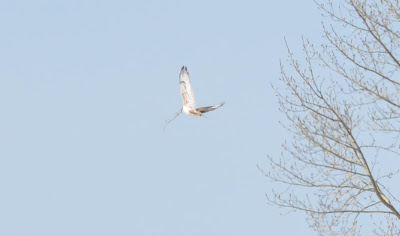 An adult FEHA carrying a stick it has just pulled off a live tree. 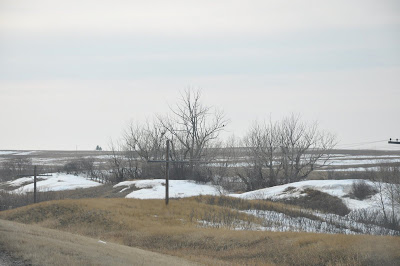 The adult hawk is sitting on the right side of the largest tree in the middle of the photo. The new nest they are building is just above, and to the left of the middle power pole.
Posted by Jared B. Clarke at 11:14 PM