Posts have become scarce these days from me, mostly because Kristen and I just moved out to a farm near Edenwold, SK. We've bought an old farm yard, that hasn't really been lived in for over 10 years. Therefore, we have lost internet access for the time being (we've also lost phone service for at least another 1-2 months!!). Hopefully we can get internet sometime soon!

Anyways, I have been keeping an eye out for the young Cooper's Hawks in Wascana Centre. This is 0/K's nest (the male we banded in 2006).
O/K and his unbanded mate (we were unable to catch her this year...) were successful in fledging 4 young Cooper's Hawks out of the nest. We banded the young birds (o/X, 5/P, 5/V, 5/E) on July 19th.
Unfortunately, 0/X did not make it after leaving the nest. He was found dead on the ground near the nest on Aug 4th. It is unclear why he died as we watched him flying around about a week after we banded him and cause of death was not determined by our observations.

The other three girls have been hanging around still but seem to be moving further from the nest each day. They are likely being fed infrequently by their parents (if at all still) so are having to capture their own prey now.

Randy McCulloch and his friend Boyd, came down to Wascana Centre and were able to snap some good pictures of the young females with their red leg bands flying around. Here are two of those photos. Can you read their red leg bands? These are both Randy's photos. A special thank you to him for letting me post them here. 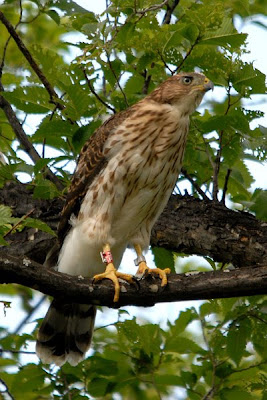 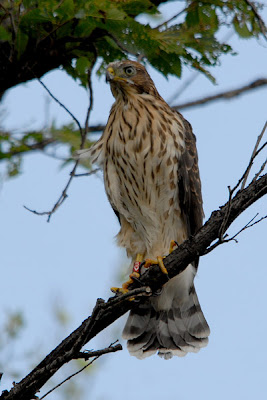 This photo I was able to snap on July 31st. The young birds were milling about on this gloomy day waiting for a prey delivery by mom or dad. I heard the male give his single "cak" call as he approached the nest area. As soon as the young birds heard this they all flew over to the tree where the male had just landed and 5/P grabbed the meal first! She allowed me to get quite close and watch as she gobbled down this Robin. 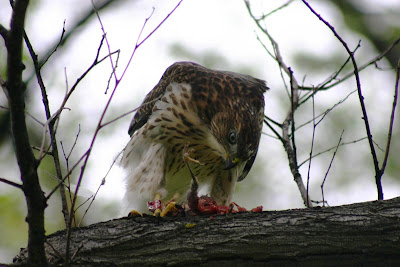 Great pics! And congrats on the move to the farm.