Yikes! I can't believe it it already Oct 8th! It's been a while since my last post.
We are now supposedly deep in to the Northern Saw-whet Owl banding season, but our numbers do not reflect this! I started on Sept 15th this year, 5 days earlier then any other year, and yet my total number of owls so far is very low. To date I have only captured 19 owls. If you compare this to 2006 we were at 56 by this time, in 2007 we were at 84, and last year we had captured 50 owls by this time!
The weather this fall has been dismal! It seems for every night I am able to open my nets, I have two nights were I can't. This is because it is either too windy or because it is raining, or after tonight snowing!! Although it does seem like the owls are just not moving yet. A few days ago I had perfect owling weather and yet only 1 capture at a time of the season when I should have had around 10. This is the trend across the province it seems, for example Ross at Last Mountain Lake has only captured 6 owls as of two days ago!
I'm keeping my fingers crossed for a surge of owls to show up with this cold snap we are seeing now. But we will have to wait and see I guess.... Here is the first owl I captured this fall. 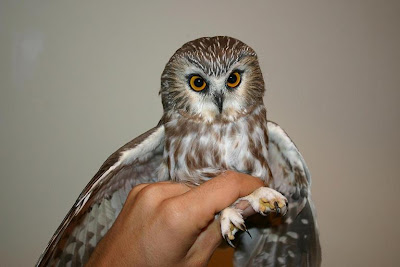 One thing that was really exciting for me this fall was finding a roosting Northern Saw-whet Owl in our shelterbelt. In the four years of banding, I have never found a saw-whet during the day! It was not me who actually found this little guy, I have the juncos and chickadees to thank. My dog and I were out walking in the morning a few days ago when I heard these little birds going nuts!! CHICKADDEEE-DEEE-DEEE-DEEEE!!!! There must have been twenty little birds flitting around the top of a few trees. I thought to myself there must be some kind of owl or hawk up there. So we went over to investigate and sure enough five feet from the top of the 30 foot spruce tree sat a little saw-whet staring down at me, seemingly annoyed with all the attention the little birds were giving it. It was sitting on a branch about a foot from the trunk of the tree. Below is a crappy picture of the owl. My telephoto lens is on the fritz. 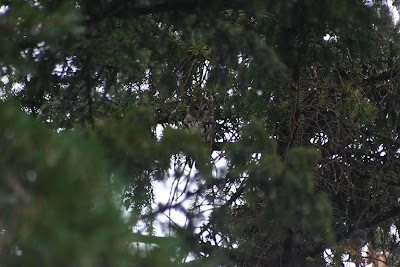