Well much has changed since I last posted on here!  Kristen and I have been busy on our farm this past year and our 16 month old twin boys have been keeping us that much more busy!

You may have noticed that my profile has changed.  As of the end of August I am no longer with Wascana Centre Authority.  I have decided to go back to school to complete a 2 year after degree program in education.  Don't worry though!  I will still be heading up the Wascana MAPS station and continue with many of our bird banding projects! lol... like you were worried.

On to the birds and the subject of this post.  I recently received a band report from the Canadian Wildlife Service.  On this report was a recovery of a Ferruginous Hawk.  What was interesting about this report was that the bird was still alive.

I had to find out what was happening with this bird, so I contacted the band reporter Diana Miller.  She is the director at the Nature and Raptor Centre of Pueblo, in Pueblo Colorado.

She informed me a female Ferruginous Hawk was submitted to them at the Centre on January 7th 2013, after being struck by a vehicle. 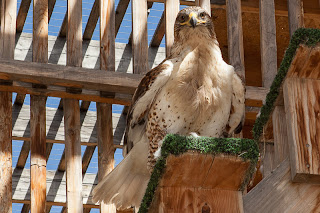 Female Ferruginous Hawk injured at the Nature and Raptor Centre of Pueblo, in Pueblo, Colorado﻿

Here is an excerpt from my correspondence with Diana:


"Yes, the ferruginous hawk is still alive.  She is a very big, beautiful girl.  Until she took a frontal assault from an auto she was thriving.  We received her at our center on January 7.  Her admission weight was 2.034 kg.  She was recovered along a highway in Fremont County, Colorado.
Upon admission she had extensive bruising to the chest and abdomen, a large laceration on the left side of her neck and chest, and internal injuries.  The veterinarian also found that her breast muscle on the left side was damaged and torn from the bone.  Her first few days were touch and go, but by the 6th day she was up, eating and ready to kill us all!  At this time she has moved into our large flight enclosure and is flying.  We are still dealing with the laceration.  Because of its location, it has been slow to close, and the stitches keep tearing out.  We caught her Sunday to check on the  wound’s condition.  It’s looking better, but I did clean it up and put in a few stitches.  It will be a few more weeks before it heals completely.  The muscle has healed well however.  Her flight is improving, but she is nowhere close to release at this time.  Her extension is good, but her endurance is poor.  I’m afraid that she will probably be with us for the summer."
After checking my records I found we banded this bird in June, 2009 a few miles southwest of Herbert, Saskatchewan.  That makes this girl just about 3.5 years old when she was turned into the raptor centre.  Here is a map of where this bird was banded near Herbert, Saskatchewan (2009; green dot) and where she was found hit by a vehicle near Pueblo, Colorado (2013, red dot). 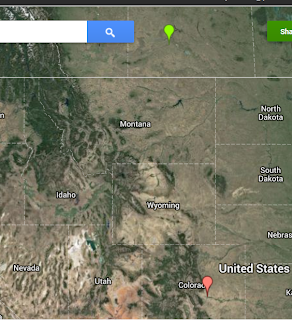 What was most interesting was that this bird was colour banded with one of our blue alpha-numeric bands.  This is one of the very few resightings we have had.  Here are her bands after 3 years. 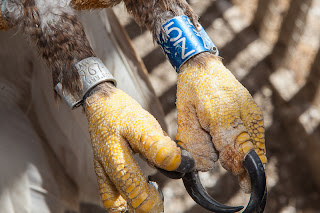 The Nature and Raptor Centre of Pueblo hopes to release this beautiful hawk in the future.  What an amazing bird.


Check out the good work the Nature and Raptor Centre of Pueblo by visiting their website http://natureandraptor.org/.  Thanks for all you do! 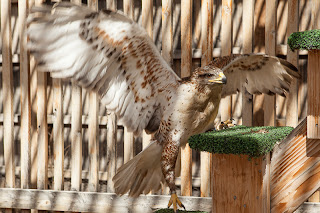 Thanks to all those organizations and individuals who take the time and effort to monitor and rehabilitate these vulnerable species.