Passing of a good friend 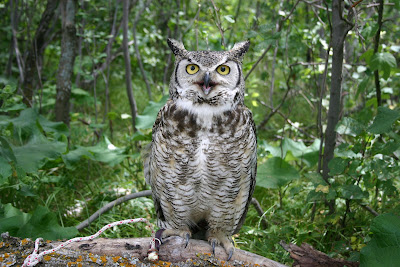 It is with great sadness, I write about the passing of a good friend, my Great Horned Owl, Tyke.


Tyke passed away on December 20, 2007, from fungal pneumonia. By the time he showed any symptoms, the sickness was to far along.
He passed away at the veterinary clinic, on his own, as I knelt there beside him.


I looked after Tyke for almost two years. For those who don't know, I received him from the Humane Society on March 29, 2006. When I got him, he had hit a powerline and skinned the inside of his wing very badly. If you had sustained the same injury, go from your wrist to midway up your forearm, take off all the skin, and that's the kind of wound he had.


It took 7 intense weeks of rehabbing to get him back to health, so that the skin wound was healed. However, because of ligament damage Tyke wasn't able to fly properly, preventing him from being released.


After some fight, I was able to get a permit to keep him. His job was to help catch adult Cooper's Hawks. He was very good at his job. He patiently sat on his perch as angry Cooper's Hawks came screaming down on him.


More importantly, I think, Tyke visited and met many people and shared with them the wonder of nature. After seeing him eye to eye, most people responsed with "I've never seen an owl this close before! He's huge! Look at his eyes!" 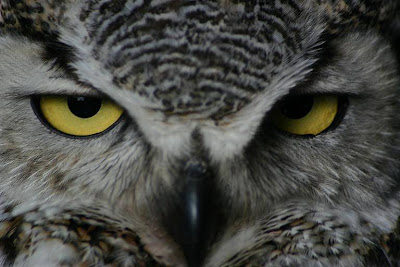 In his short time with me, Tyke visited a number of class rooms, we presented at a Weyburn Nature Society meeting, the 2007 Yellowhead Flyway Birding Trail Association symposium, at the Regina Public Library, and the Saskatchewan Burrowing Owl Interpretive Centre's Fundraiser Dinner.


During the summer of 2006 he was incorporated into tours given at the Display Ponds in Wascana Centre, and during 2007 was on display and involved in programing at the Burrowing Owl Centre in Moose Jaw.


Tyke saw 4000 people at SBOIC alone this past summer, so I would estimate he met over 5,000 people during his time with me.


He taught me alot about owls and about himself. But I believe he taught many other people about the beautiful life that is out there.


I will miss him very much, but I know now he is free to fly where ever the wind wishes to take him.