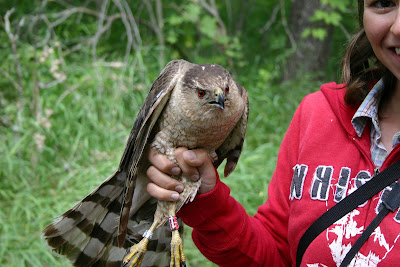 One of my favourite projects during July is working with Cooper's Hawks.

These small secretive hawks are not often seen by many people as they sit silently high in trees and watch you walk right by. 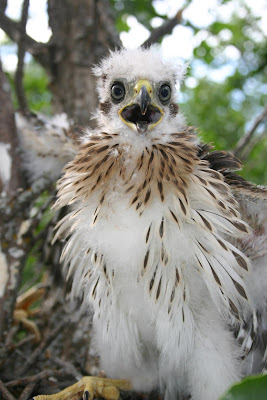 Cooper's Hawks are a bird eating raptor, eating birds like pigeons, robins, and sparrows. Adults have blue-gray backs and heads, with a white belly with orangy markings along their breast. They also have long thin bright yellow legs. COHA are cool because they exhibit a high degree of reverse sexual dimorphism. This means that female Cooper's Hawks are usually much larger than the males.

Another species that is very similar to the Cooper's Hawk is the Sharp-shinned Hawk. COHA are larger than SSHA, but small male COHA and larger female SSHA can be fairly close in size. One diagnostic feature if you get a good look at a sitting birds (which rarely happens) is COHA have a distinct grey cap that contrasts sharply with their back. The top of the head of a SSHA is the same colour as its back, so it does not contrast. In the hand, this difference is very evident. 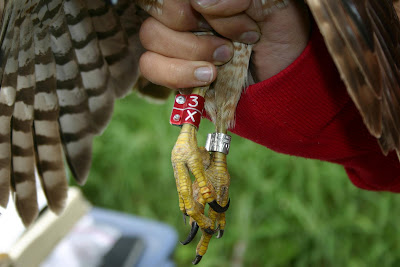 My project with COHA is simple. I trap the adults and band them with special colour bands so that I can identify individuals again without having to recapture the bird. I trap them at their nest so we can learn how if adults come back to the same spot to raise their young and for how long.
For example, seen below on the left is 3/A (her red band number), a female Cooper's Hawk, and on the right is O/K, a male Cooper's Hawk. My mom and I captured these in Wascana Park at their nest in 2006. In 2007 I saw 3/A back in the same area but could not find her nest. But in 2008 I found both 3/A and O/K at a new nest together and they succesfully raised 3 chicks. We will wait and see if they both return in 2009. 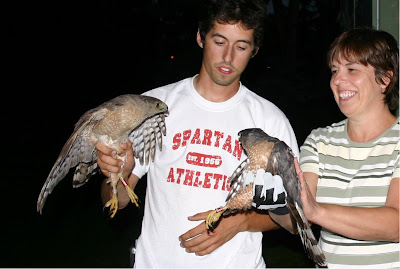 We also band the young birds in the nest and observe the nestlings after they fledge (leave the nest). Again we can identify birds as individuals because of the red band so we can tell which chicks stick around the nest after they can fly and for how long. 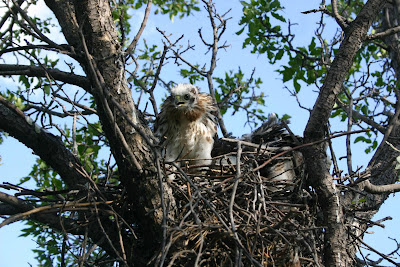 We just had a Cooper's hawk land in a tree outside our kitchen window near Asquith, Sk. As it was perched away from us, we could not see if it was banded though.

Very cool Mark! Cooper's Hawks are not very common in SK during the winter, so a neat sighting!