This year, while banding Ferruginous Hawks (FEHA) around Morse and Herbert we found a few large nests that had been completely blown out of the tree and were destroyed, like the one shown below. We usually found dead chicks littered on the ground around the nest at the same time. 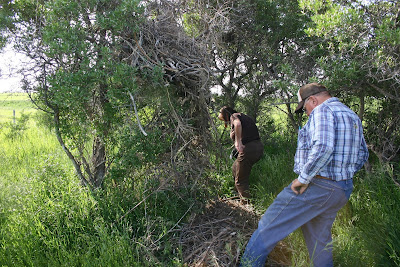 In an effort to create some permanent, reliable nesting locations for FEHA, we decided to install 7 artificial nesting platforms for this species to use - and that's just what we did. Artificial nesting platforms have been used extensively in the Bitterlake PFRA pasture and with great success. Many the platforms we are monitoring were succesful this year.
With the help of Randy, Lori, and Mike from Hebert/Morse, and Lorne Scott and Kristen from Indian Head and Regina, we were able to get all 7 platforms installed in one day. 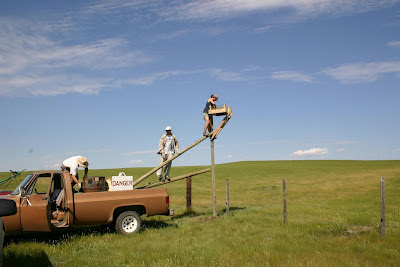 We assembled the platform part of the nest earlier in Lorne Scott's workshop. On the day we had an auger rented and had acquired 7 large poles from Swift Current. When all was ready we had a full convoy of 2 trucks and 1 van packed to the brim.
We had already made contact with the landowners and proceeded to the designated locations.
While a few of us augered the hole for the pole, others connected the platform to the pole. 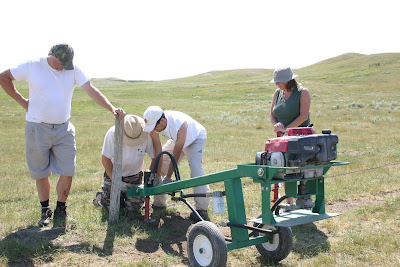 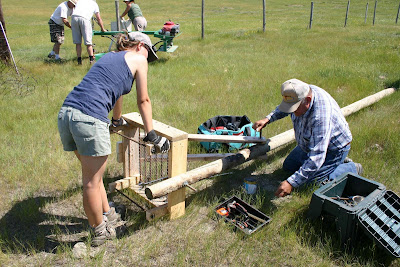 Then we hoisted the platform up and into the newly dug hole. The digging of the hole varied from our first hole (in sand) which took 5 minutes to dig through, versus our second hole of the day (in clay) which took closer to 45 minutes. After the first platform was installed we thought this would take no time at all.... until we started the second pole.
Once the platform was up we added lots of sticks, grass and of course, cow manure. We wanted the platform to appear as though a hawk had already nested here before. Why cow manure you ask? Well, we are not really sure why the birds do this, but FEHA regularly place pieces of dried cow manure in their nest. So again, to make it appear as though FEHA's had used this nest in the past we added the manure! 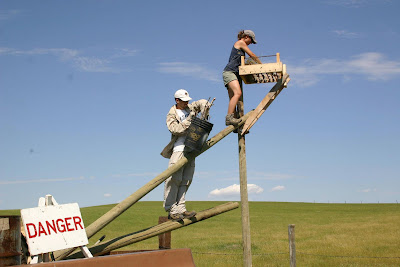 Just in case you are wondering, the Danger sign was brought for aesthetic purposes.
We placed 4 of the nests in areas where this years nest had been destroyed and placed a few nests in spots that are over run with Richardson's Ground-squirrels and no trees or nests are present.
We anxiously await the return of the hawks next year to see how many platforms are used.
Posted by Jared B. Clarke at 10:19 AM