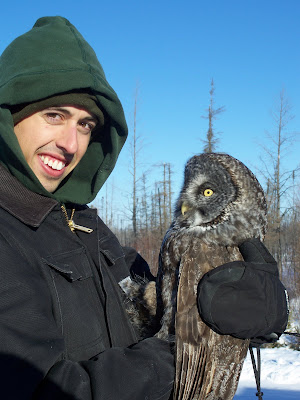 This girl (we think), weighed in at 1274 g, with a wing chord length of 441 mm.
Can you see in the picture how some the flight feathers (the largest feathers on the wing used to fly) are different shades of grey, some are even brown? This means that this bird has different generations of flight feathers, which is a technique that is used to age certain species of birds (this has been mentioned before with saw-whets). 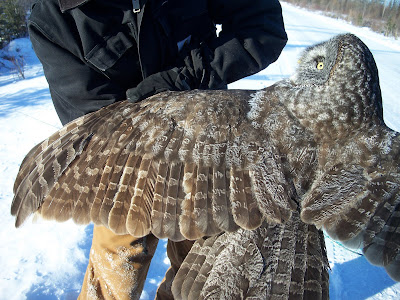 Based on the number of feather generations in the wing of this bird, we estimated that this bird was atleast 3 years old.
Well, were we surprised to find out later that day that this bird was originally banded on 24-Feb-2001! That would be eight years prior to our capture of her. Because she was aged as atleast one year old when she was first caught, we know that this bird is atleast 9 years old! The oldest longevity record for the Great Gray Owl is ~12 years.
Interestingly, she was captured initially only 64 km S of where we captured her!
Recaptures like this are what researchers like Harold are looking for. This data will help us understand movement patterns of these owls between seasons (many seasons in the case of this individual!) and understand population dynamics (how old birds live, the proportion of young birds captured versus older birds captured, etc). It was fantastic to be part of this find!
Posted by Jared B. Clarke at 11:31 PM

Six years ago I came across a flightless great horned ownlet just behind my property - fully grown and all in fuzz. It was an amazing encounter. In a case like that should I contact someone to come band?

Here's the story of a raptor/raven encounter that happened here several years ago. The raven still comes to call.

You have to write more often!

Thanks for your comment!
And very neat story about the raven and red-tail.

Regarding your question of the young owlet. You can contact me and I can come out or I can contact a more local bander about your nest. We'd be happy to come out and band the young birds.

...he was on the ground. When we first moved here there was a great-horned owl who lived in our region. But now I have not heard or seen him in years.

Good info to know, though, for future reference!