The Mystery of the Banded Tropical Mockingbird

Now don't get all excited, no one in Saskatchewan has seen a Tropical Mockingbird. I thought I would share this neat story, because I learned something about banding in North America from it.
I recently was in Mexico for a family vacation. We stayed at a resort south of Cancun on the Yucatan Peninsula. It was amazing to see so many tropical birds, from Magnificent Frigatebirds, Great Kiskadees, Yucatan Jays, to Squirrel Cuckoos. It was also a real treat for me to get to see some of the warbler species we see in Saskatchewan during the breeding season, but there they are on their wintering grounds. We saw Black-and-white, Magnolia, Yellow, Common Yellowthroat and American Redstarts.
One bird that was ubiquitous everywhere we went was the Tropical Mockingbird (TRMO)! This bird is slightly different from the Northern Mockingbird folks here in SK might be familiarly with, but not much at all.
These guys were everywhere around our resort!
One morning as we were leaving the restaurant area, we noticed a TRMO sitting in a tree. We had our binoculars with us, so had a look at the bird. Well, to our surprise it was wearing a band around its leg!!! I couldn't believe it! What are the chances!?!?! 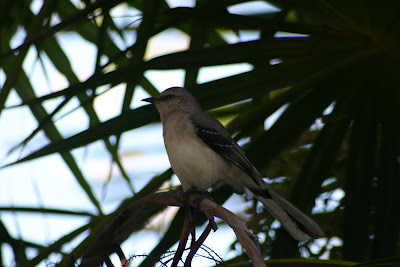 (Can you see the band on the birds left leg?)

We observed the bird for a few moments and then carried on.

Being slightly obsessed about banding, Kristen and I decided to go back a few days later and see if the bird was still around. We had noticed that TRMO's seemed to stay in the same areas each day, likely individuals on something of a territory.

To our surprise, the band number included letters - "RSK4557" to be exact.
We recorded all the pertinent data - location, data, status of the bird - and continued on our way.
Once we returned to Regina the next day, the quest to find where this bird had been banded was on!

I started by contacting the bird banding office to see what they could tell me. Interestingly, I found out that the BBO does not supply Mexican banders with bands for birds that do not migrate into Canada or the United States. Therefore Mexican banders must have the bands they are going to use on tropical resident birds (like Tropical Mockingbirds) custom made. Therefore, the BBO does not have any record of this band, since it is not a BBO band. They tried to do a search for a bander who might band migrant birds in that area, but with no luck. So how am I suppose to find the mexican bander who banded this bird if the BBO doesn't know!?

Luckily, a friend of mine, Steve Davis, who works for Canadian Wildlife Service was in Mexico the week after I arrived home! He was actually teaching Mexican banders how to catch and band grassland songbirds. I quickly sent him an email, unsure if he would have internet access where he was. Thankfully, he did! He passed the information onto his collegues and they responded with two possible emails for me to contact.

Unfortunately, I have not heard anything back from the two organizations who I sent the banding information to. So as it stands I do not have the mystery solved. Hopefully something comes through soon! I couldn't believe that on my trip to Mexico I would find a banded bird!
If I solve the mystery of the banded Tropical Mockingbird, I will surely post the answer here!
Posted by Jared B. Clarke at 9:05 PM

Dear Jared,
You're quest to find where the banded mockingbird came from has inspired me. You are such a interesting young man, with obviously great passion for what you do.
Keep up the great work!