Eggs have been laid

On Monday evening (May 4), Kristen, and I, along with our friends Darla and Mattea headed out to check on a few of our American Kestrel boxes. We had an enjoyable evening and managed to capture a few adult females. 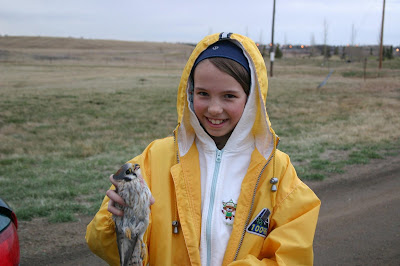 (Here is Mattea with one of the female American Kestrels,
before we placed the bird back in the box)
In total we checked 3 boxes. Two of the boxes contained 2 eggs (so the females are still laying) and to our surprise, one of the boxes contained 6 eggs!
At this time last year, all the clutches were completed, so the birds seem to be quite behind in their nesting season (except for the six clutcher). This is likely due to the cold spring we have had. Here is a photo of the 6 egg clutch. 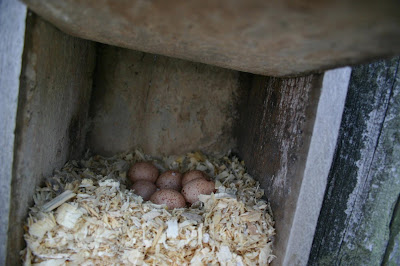 As described before, American Kestrels lay on average 4-5 eggs. The female will lay the first 4 typically without beginning incubation. Once the 4th (usually out of 5) egg is laid the female will begin to incubate. Then a day or two later, the last egg will be laid. This means that when we go to band the chicks later in June, four of the chicks will be roughly the same size having hatched on the same day typically, and one will be a little bit smaller having hatched a day or two later.
It will be interesting to see how the relative age of the chicks compare in the 6 egg clutch. Did the female begin incubating after the 4th egg was laid or the 5th?
When incubating eggs, female birds (typically the sex who primarily incubate the eggs, but not always) lose the feathers on their belly and at the same time their skin on these bare spots becomes loose and very fluidy. This helps the skin sort of wrap around the eggs, to maximize the amount of heat that can be transferred from adult to egg. American Kestrels develop 3 such brood patches. One develops on their lower belly, and two on their sides closer to their "armpits". In most monomorphic species (males and female look identical) the brood patch can be used to determine if the bird is female. However, in some species males develop a full or partial brood patch as well! In kestrels, males can develop partial brood patches.
Here is a photo of the medial brood patch on one of the kestrels we caught the other day. 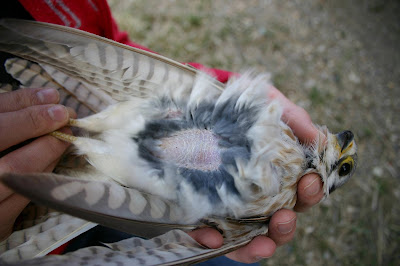