We have been watching Wascana Park closely for the return of our pair of colour banded Cooper's Hawk. We banded the male (red band O/K) and the female (3/A) in Wascana Park in 2006 at their nest. In 2008 the pair were together at another nest in Wascana.
We were anxiously awaiting their return this year.
Finally one of them showed up on Thursday last week! We were beginning to worry that they both had perished and no one was going to return.
On Thursday morning, we found O/K breaking sticks off of a tree and flying up to add them to his nest. He then flew from the nest and landed ontop of a female, who we hadn't seen yet, and copulated with her. After this, he continued his work of breaking off branches and adding them to the nest, as his mate watched.
We moved closer to see if we could see if the female was banded. After getting a really good look at her legs, we concluded that she was not banded. So 3/A has not returned.... yet, perhaps. We are not sure if she has died, or if she has moved to another territory with another male, or is still migrating.
Regardless, O/K is back in Wascana for his 4th summer with a new mate! Exciting stuff, if you ask me!!
This is a photo of O/K when we first captured him in 2006. 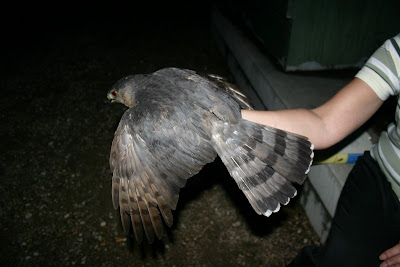