A mix of everything in one day!

Yesterday Kristen and I had a day of many adventures, involving many species of raptors, as well as a few other events.

We started out with our friend Kathy Hedegard in Estevan for an early morning Cooper's Hawk (COHA) survey. We were up at 4:15 AM and on site by 5:20 in the Souris river valley. Cooper's Hawks are notoriously secretive birds. Most birders observe them flying high in the air, flying away after being startled from a tree or if they are lucky, will have seen one sitting on their fence watching the tasty little birds at the feeder. There is one time of the year when COHA are vocal - at dawn during the pre-incubation period (ie. when the birds have just arrived at their nest site and are building the nest). So this is why we were out so bloody early!

We had success finding a single bird at one of our active sites last year. We were unable to see if it was banded but it was good to see one of the adults had returned! Last year we banded the female at this nest, 3/X, which I posted about last July. Hopefully when we go back later in May we will be able to ID her, if Kathy doesn't ID her first.

We then went over to another site where Kathy's cousin, Mr. Larry Preddy had seen COHA a few days prior. Success!! We found the pair of hawks and found a newly added to nest. 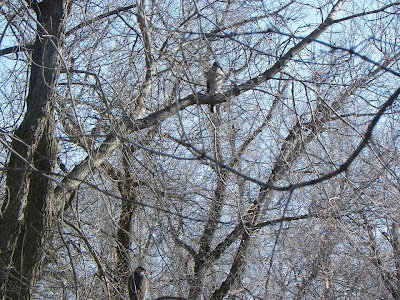 (You can see the pair of Cooper's Hawks, one on the bottom of the photo, and one high up on the branch. Larry snapped this as he walked by on his morning walk.)

During a little searching in a campground near Estevan we also noticed four Broad-winged Hawks, roosting in a couple of trees. They seemed to just be getting active when we found them. One bird was sitting right beside the road when we drove by and so we decided to set our trap for it and waited to see if we had any luck. Well what do you know, he went for the bait and we had him caught! 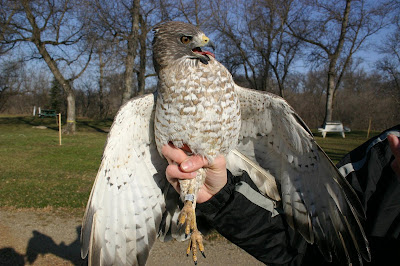 I had never banded a Broad-winged Hawk before, so it was really neat to get to handle one. It was a beautiful bird, but way smaller then I thought they would be. Flying in the air they look large, but this guy was a tiny little thing. Weighed only 422 grams. 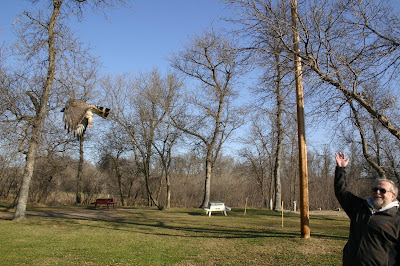 On the way home we stopped to watch a few kestrels and had some luck catching some around Estevan. 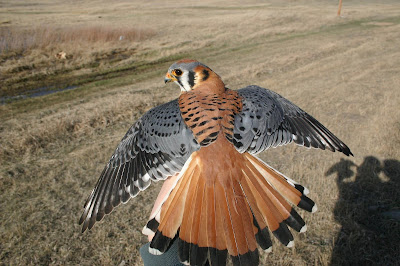 Lastly, we stopped in Weyburn to visit with Kelly Kozij. Kelly informed us he had a Great Horned Owls nest that had chicks that were quite old already, we estimated ~3.5 to 4 weeks! He asked if we had time to assist him on this nest. Of course we had to oblige. So off we went. Kelly masterfully climbed up a fairly difficult poplar tree, roughly 40 feet tall, and banded the 2 young owls. In the nest were the remains of two American Coots. Both adults were very agitated with Kelly's presence and one came in to strike but veered off at the last moment. 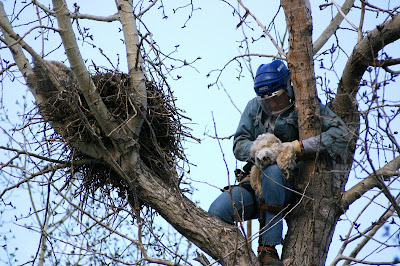 (Kelly banding one of the nestling Great Horned Owls. You'll notice the helmet Kelly is sporting. We have been hit a number of times by angry adult owls. Some banders, have lost eyes!) 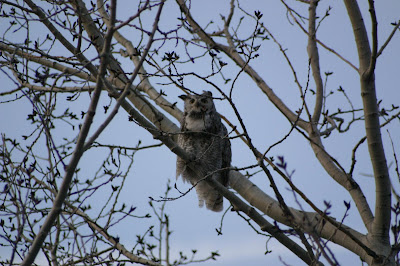 (This isn't the crispest photo, but I like how it shows how large the white throat patch is on this clearly angry momma. When agitated Great Horned Owls puff their throat, as you can see!)

We packed our stuff up again and were back in Regina by 10:00 pm. A long day, similar in length to our Northern Hawk Owl banding trip but not as many kilometers. All in all we had a fantastic time and got to see and handle some cool birds, and got to visit with some great folks!
Posted by Jared B. Clarke at 3:05 PM

I agree, the colours on the kestrels are fantastic. I must admit though, that I have never actually seen a Gyr, so I am a little jealous that you have to "make do" with them! Lol.
Do you see many white morphs around?

Nice BWHA... I just caught my first this year too. It was even smaller than yours, weighing just 381g.
I band in ON near where Mike Blom was living (Peterborough area). Anyway, I enjoy your photos and stories. Thanks