It was a gloomy cloudy and rainy day here in Regina today. After work the rain subsided for a couple of hours so Kristen and I decided to go for a drive and see what was happening at our kestrel boxes.

We have about 10 boxes set up around the city. Last year we had 7 of the boxes raising little kestrels. Naturally, we are curious to see how many birds show up and use the boxes this year.
I have read in other studies of kestrels that the same birds typically do not return to the same box year after year. In other words, there is a high turn over of kestrels using the same box over a number of years.
Last year we were able to capture all 7 of the females at each of the boxes. It will be interesting to see if any return.
So far this spring, 5 of our boxes are active. The first male kestrel arrived back on March 27, and his mate showed up the next day! In contrast, tonight we saw a single male for the first time at another one of the boxes. So they are still arriving.
This evening we were able to capture two kestrels, one male and one female! The female we found not at one of our boxes but sitting on a telephone pole enroute between boxes. The male we captured was at one of our boxes, the first time we have seen activity at this box. Last year though, this pair was fairly late in nesting compared to the rest of the birds, so perhaps its the same birds? We did not see the female and unfortunately we did not band any males last year so don't know if he is the same bird. 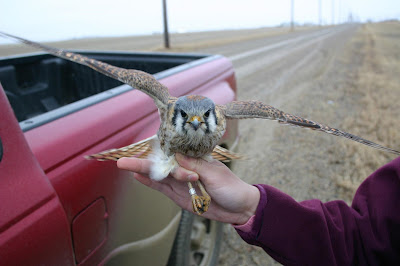 She was a little damp from the rain but was in a fierce mood nontheless.
Posted by Jared B. Clarke at 10:55 PM