A big surprise in Wascana Centre! 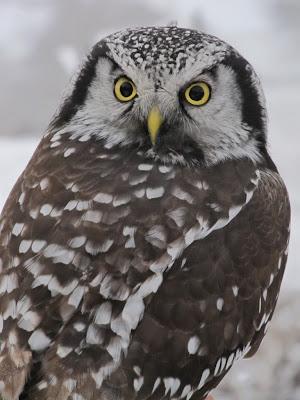 Well the snow fell on Sunday this week and already a Northern Hawk Owl shows up in the Centre just yesterday (Nov 7, 2011)!!

This is the second NHOW that has been in Regina in the last three years. This is a very unique find as the Northern Hawk Owl spends almost all of its time in the forests of northern Saskatchewan. It is quite unusual to find it south on the prairies. Margaret Belcher's "Birds of Regina" (1980) makes no mention of Hawk Owls in Regina.

We were able to capture this bird this morning and band it.
The bird weighed 330 gram, with a wing chord of 227mm. I aged it as an AHY as it had retained primaries, secondaries, primary coverts, alula, and median and lesser coverts. However, the greater coverts were all replace. You can see this in the photo below. 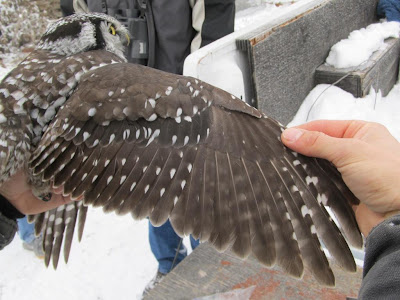 The bird was originally spotted by Dan Sawatsky on his street in southern Regina. I later saw it in the Habitat Conservation Area in Wascana Centre. This morning it was in the Display Ponds. 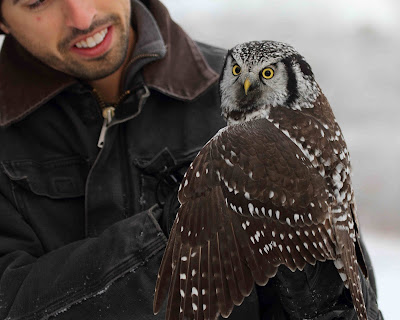 Kim Mann snapped this photo and allowed me to post it here. Thanks Kim!
Posted by Jared B. Clarke at 12:01 PM

Hey Jared,
Would you mind if I came out banding with you sometime?
Gabriel

That's terrific! What a beautiful bird :)