This weekend we got out and set up a net to try to trap and band some of the birds frequenting our bird feeders. We have been trapping Black-capped Chickadees here at our farm since February 12, 2010. 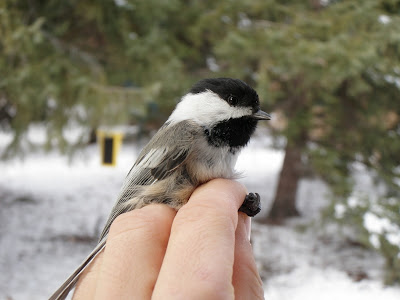 On November 11, we captured 11 unbanded Black-capped Chickadees and 2 chickadees that already wore bands. The two recaptured chickadees were banded at our feeders on Feb 13, 2010, and on Feb 21, 2010. That was approximately 21 months ago! 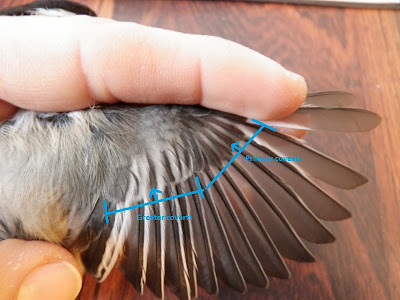 This photo shows the wing of Chickadees #202. You can see the greater coverts have nice bold white edges. The primary coverts are nice and broad with some white peppering the middle of the feathers. These two characteristics suggest this is an older bird, which is confirmed by the band it was wearing. 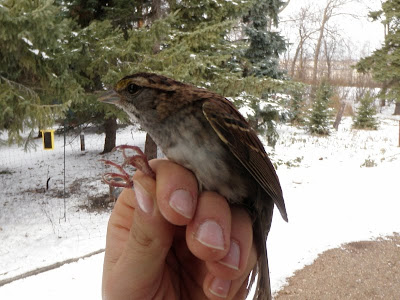 We had been seeing this bird at the feeder for a couple of days and were excited to capture it. It is a White-throated Sparrow. This is a tan-striped bird, as you will notice the white and black crown, and white throat are not very colourful. We hope it survives the winter! Normally these birds will winter in the southeastern United States.

To learn more about White-throated Sparrows check out this website (The Cornell Lab of Ornithology).
Posted by Jared B. Clarke at 10:17 AM