While the Gray Catbird (GRCA) may not be the most flashy bird that we catch at Wascana MAPS, it is definitely one of the most interesting in terms of what we are learning about this species.  Overall it is the 5th most common bird we capture.  Between 2010 to 2013, 126 GRCA were banded, 72 of those were adults, while 74 were juveniles.

The Gray Catbird is a gray bird, that gives a "meow" like call; hence the name... It has a dark gray crown and rusty undertail coverts, as seen in the two photos below.
Over the last 4 years, the Gray Catbird's productivity has stayed relatively even as seen in the figure below.  This means that roughly the number of juvenile birds that we catch each year, stays proportionally close to the number of adults captured in that same year, with some small fluctuations.  In some of the other species we band, we see large fluctuations in juveniles captured, which is not what we see with GRCA.  Therefore, from this limited data set, these data suggest that the GRCA population is not at this time, significantly increasing or decreasing, and that productivity seems to be fairly consistent at this location.  This is not to say that productivity is good or bad per se, as this is not a comparison to other sites, but simply that it is consistent at our site between years.
Another interesting component to look at is how Gray Catbirds utilize the habitat within Wascana Marsh.  This map shows the net configuration that we use at the Wascana MAPS station.  For a photograph of each of the nets and the surrounding vegetation structure, check out Wascana Centre's website. 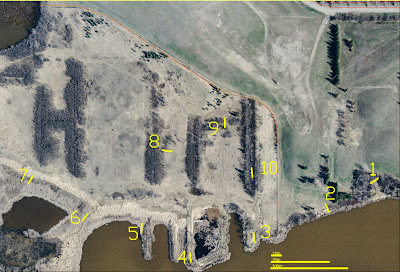 We can graph where the Gray Catbirds from 2010-2013 have been captured.  In the figure below, it is clear that Net 2 catches the majority of GRCA.  If we were to break this down greater, you would see that this is the location where we catch a high proportion of young GRCA that are moving along the marsh edge.  Net 2, is in general, our most productivity net, with approx. 25% of the total number of birds we capture each season coming out of that net.  It seems to be a narrow corridor that many of the birds travel along.  Although in the last two years, beavers have changed some of the willow structure around the net, so its capture rate has decreased. 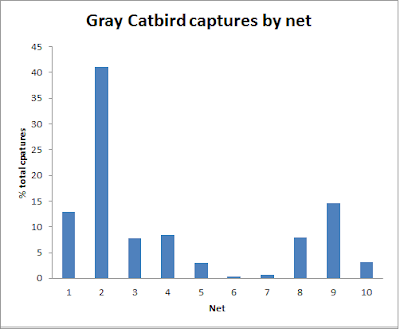 The overall trend that can be observed when matched with the map, is that GRCAs utilize the marsh edge when there are willows present, but not where there is just cattails and bulrush (net 6 and 7).  They also use the caragana and tree rows inland as well.  We have found GRCAs nesting along the marsh edge (near net 4) as well as inland (near net 8 & 9).
Part 2 of this post, will focus on the recaptures and returns of the Gray Catbird at the Wascana MAPS station.﻿
Posted by Jared B. Clarke at 9:35 PM