Well this was a bit of a bust of a year for us, in terms of Northern Saw-whet Owl banding!  In total we banded only 45 saw-whets in 20 nights of banding, between September 20 to October 20.  Compared to our 6 year average (2006-2011) of 131 owls/season, this is significantly lower.  We typically stop banding around the end of October, but poor weather prevented us from opening after October 20!
One neat bird was a recap by my sub-permit, Adam Crosby, captured on October 23, 2013, while I was unable to man the banding station.  The bird was wearing a band that had been placed on its leg at White-fish Point Bird Observatory on March 20, 2012 as a third year (TY) bird (in other words, it hatched in 2010)!  White-fish Point Bird Observatory is 11 mi north of Paradise, Michigan. 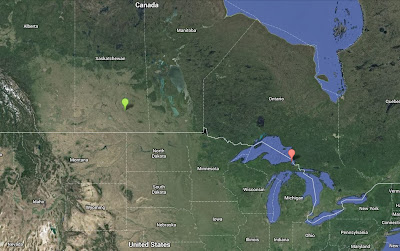 As you can see this is quite the distance between our two sites!  Our banding station, where we captured this owl is the green dot, while White-fish Point Bird Observatory is the red dot.  It is important to remember that this is not a direct band encounter.  The bird was banded at WPBO in spring 2012, bred somewhere in 2012, migrated south in the fall 2012, returned somewhere north in 2013 to breed and then passed through our area during the fall of 2013.  There is substantial evidence to suggest that saw-whets are fairly nomadic in terms of where they breed each year and this band recovery is somewhat suggestive of that idea.  In other words, the bird could have nested in northern Ontario in 2012, and then bred in northern Saskatchewan in 2013, but we don't know.  Based on a number of recaptures, we currently believe that saw-whets migrate in a south-east direction when moving through the prairies in Canada.  While these kind of encounters are really exciting, they end up generating more questions then they sometimes answer!

You can check out White-fish Point Bird Observatory's website here.