It seems like in the last month or so there has been a flurry of sightings of Turkey Vultures (TUVU) with green tags on their wings!  According to Dr. Stuart Houston of Saskatoon the lead of the Turkey Vulture tagging program in Saskatchewan, 1225 Turkey Vultures have now been tagged in the province over the last 11 years!

Despite having been involved in this project for about 4 of those years, at the beginning of this summer I still had never seen a tagged Turkey Vulture flying around!  However, that all changed on Sunday this week, as we drove home from Big Sandy Lake. 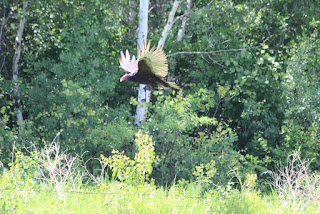 A88 just taking off.

Sure enough, upon turning around.  There sat a Turkey Vulture with A88 on its patagial tag.  Bird banders are not able to band TUVU with a standard aluminum band, because of their habit of defecating down their legs as a way to cool themselves.  Over time their crap can build up on an aluminum band and cause damage to the birds leg. So instead some banders put patagial tags on the TUVU wings.

We were just able to get a glimpse of the tag's digits when the bird flew away. 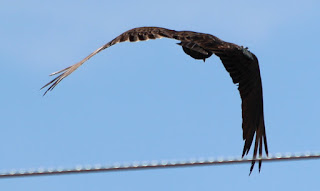 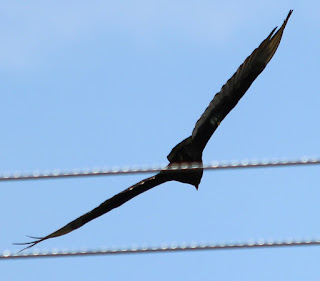 Back at home, I contacted the Dr. Stuart Houston and informed him of our sighting.  It turns out this bird is 6 years old!  It was tagged on August 30, 2009 near Hagen, SK as a nestling.  Therefore, 6 years later, this bird is only 70 km away from where it hatched!  Pretty amazing when you consider that these birds winter in Costa Rica or South America!  And it has gone south 5 times now during its life. 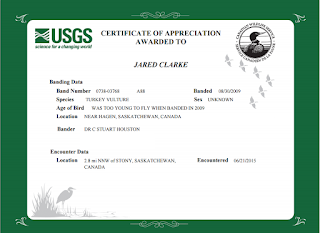 My certificate of appreciation for the tag sighting.

What adds to this story, is that this is not the first time A88 has been seen! In October, 2009, on its first migration south, A88 was observed near Trossachs, SK.  And then again in August 2012, this bird was sighted in Saskatchewan!

If you are so lucky as to observe a tagged Turkey Vulture, make sure you record the date, location (gps location is optimal), the tag number, colour of tag (different colours mean different projects) and what the bird was up to.  You can contact me at my email address on this blog and I can put you in touch with Dr. Houston.  Its important to get the 'air number' from Dr. Houston, prior to submitting your observation through the www.reportband.gov website, as this will help speed up the process.

Dayne Wilkinson, just contacted me a few days ago (June 22) for just that reason after his dad snapped this photo of E81 just west of Prince Albert, SK.  This bird was tagged in 2012, making it 3 years old now. 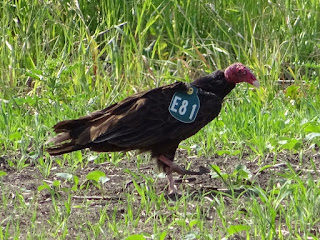 Turkey Vulture E81 - Thanks Mr. Wilkinson for letting me post your photo!
Posted by Jared B. Clarke at 11:04 PM