We are now 2/3's of the way done the 6th season of Wascana MAPS!  Does the summer fly by or what!?

Some of the most interesting stories I think we have learned at Wascana MAPS over the years is from returning birds.  Session 4 added a few new recaptures of birds who we hadn't seen yet this summer.

This bird demonstrates why banding birds with unique identifiers is so important to understanding population dynamics.  When I have a bird in my hand, I can typically tell whether that bird hatched this year, last year or sometime before that (for many songbird species).  But if that bird is 7 years old like this robin, without a band on her leg, I could only say she is 2 years old or maybe more... 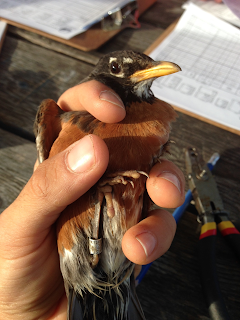 We also recaptured a Brown-headed Cowbird (2013), a Gray Catbird (2011), a Common Yellowthroat (2012) and a Song Sparrow (2013), who have been recaptured EVERY year since they were first banded (in brackets).  These birds are demonstrating how important Wascana Marsh is for their survival and how strong their fidelity is to this location.  These birds travel thousands of kilometers away each fall and back in the spring, to come back specifically to this area in Wascana Park!  Truly amazing stuff and truly speaks to why protecting this area for these animals is so important. 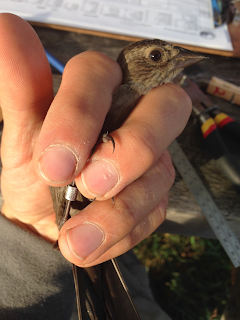 We have now completed what is termed the Adult superperiod in MAPS jargon.  Sessions 1-4 are dominated by breeding adults and few young (although we have seen a lot of young American Robins and Song Sparrows in the last 2 sessions).  For the last two session of the summer we enter the Young superperiod!  This is when we see a lot of the young that were produced during the summer start to really disperse (as they are heading out on their own) and start to arrive in our nets.  Last year (2014) because of a number of factors we saw a pretty significant decrease in the number of young produced compared to the previous 3 years.

What will this summer bring?  Was the warm, dry conditions good for nestlings?  Or did this cause a decrease in food sources for some birds to feed their chicks with?  In the next two weeks we will find out. 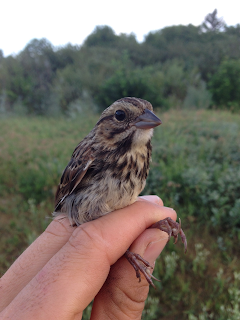 One of the 15 juvenile Song Sparrows we have captured this year at Wascana MAPS.

In addition, here is a comparison graph of the total number of birds captured during each session at Wascana MAPS from 2010 to 2015. 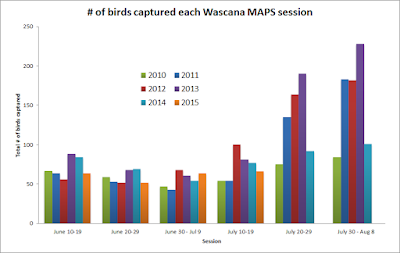