This year I was again able to assist Dr. Stuart Houston's crew with their Turkey Vulture tagging project in Saskatchewan!  It was great to be part of the small group of dedicated researchers who study this species in North America!  Such a unique bird and a smelly one... 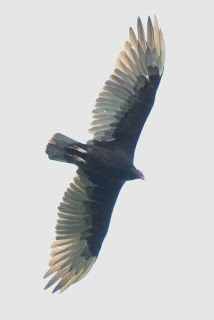 Imagine if you will, a dead, rotting, nasty skunk on the side of the road.  A delicious meal for a Turkey Vulture.  After consuming as much as it can carry the adult vulture will return to its nest (possibly 80 kms away!) and regurgitate its semi-digested meal out for its babies to eat.  The young gobble up this fantastic meal.  Unfortunately for us taggers, when you go up and try to catch the young vultures they then throw up their semi-digested dead skunk meal to try to make us think twice about grabbing them... fantastic...

The goal of tagging these young birds is to determine at what age turkey vultures begin to breed at.  Amazingly, prior to this study only 1 known aged breeding bird was known to science - an 11 year old bird in Wisconsin.  Because turkey vultures defecate down their legs to cool themselves, no one is allowed to band this species with a metal band.  So this is one of the reasons for the lack of prior knowledge but also why we use wing tags.

So far 7 tagged nestlings have been found breeding in Saskatchewan 4-10 years after being tagged.  But we need more of these records!  7 records isn't that many considering the over 1217 nestlings that have now been tagged in SK!  Despite the low number of birds being found again as breeding birds, over 400 sightings have been made of nestling turkey vultures once they have left the nest and up to 10 years after being tagged. It is estimated that turkey vultures can live to be 40 years old!

So if you see a green tagged turkey vulture in Saskatchewan sitting on an abandoned building in the spring PLEASE contact me!  This sighting could reveal previously unknown information on this species!!

Here are some of the birds I tagged this year. 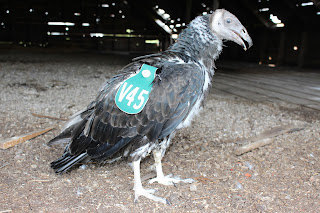 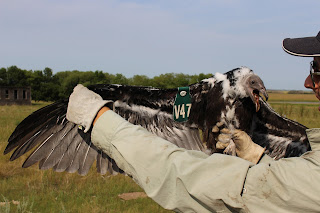 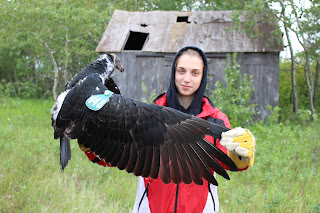 Alisha shows the wing length on this young vulture. 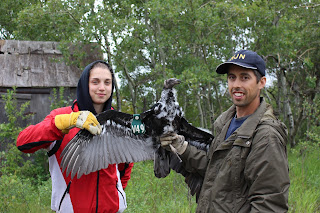 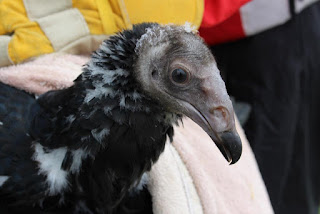 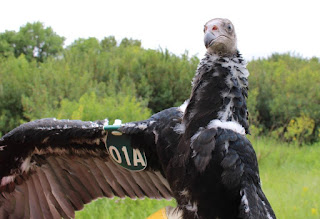 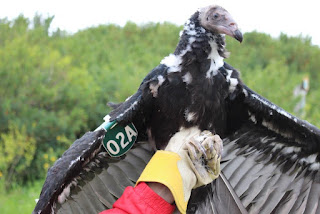 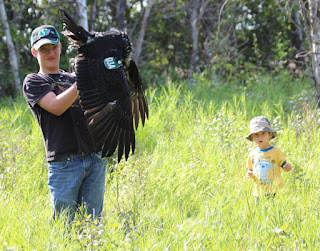 My cousin Hunter and my son Rowan with 03A. 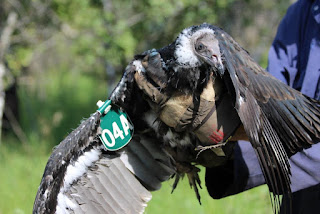 Ralph Goff holds 04A a young vulture tagged in an old house on his land. 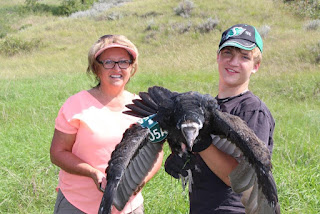 Diane and Hunter with 05A. 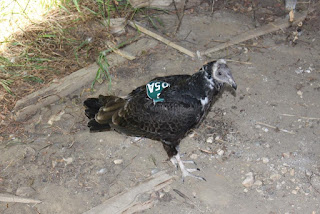 05A back in the old barn it was raised in.  It will be less than a week before it can fly. 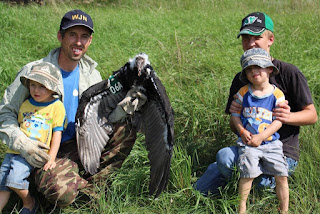 New tagging recruits, my sons Rowan & Teal & cousin Hunter with 06A.
Posted by Jared B. Clarke at 9:31 PM