Will these Yellow-headed Blackbirds come back?

This summer, I started a project on two sloughs around our farm near Edenwold, SK.  Yellow-headed Blackbirds are beautiful birds when you actually have a close look at them and get over the fact they are 'blackbirds'.

Two year old breeding males have striking yellow heads and throats, a black mask and bill, with a jet black bodies, and white primary coverts.  First year males, lack the bright yellow, instead have a dull yellow head, and a brownish body.  Generally, these young males do not hold their own territory.  The females on the other hand, have a brownish body plumage, with some yellow on their head and throat.  Males are bold and flashy to attract their mates and females are more cryptic to hide while incubating. 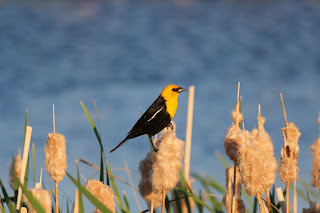 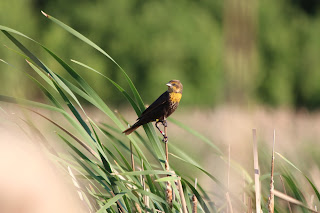 There are a number of interesting things about Yellow-headed Blackbirds.  Males hold territories and may attract multiple females into their territory to nest.  This mating strategy is polygamy.  The male will sometimes help the first female who nests in his territory to feed her offspring, but the rest of the females must care for their brood entirely on their own.  This summer, I believe one male had 4 females in his territory, but they can apparently have up to 8 females.  Males defend their territory from predators and other rival males.  Female yellow-heads weave a basket nest, amongst the cattails that hangs over top of the water.  Prime nesting territory seems to be where the water is deeper, but the cattails are still tall. 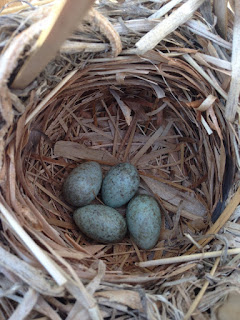 A Yellow-headed Blackbird nest with 4 eggs.

We have a high density of Yellow-headed Blackbirds nesting all around us as the water level has been high around here for the last 5 years.  On our slough maybe 30 meters from our house we had at least 20 yellow-head active nests, over the course of the summer.  This abundant local population provides a great opportunity to study this species, while keeping my carbon footprint associated with the project low.

The question I am interested in is nest site fidelity of female yellow-heads.  In other words, how often do females return to the same slough year after year to build their nest.  So to study this, I began marking the birds with small plastic colour bands so that individuals can be identified with a camera, binoculars or a spotting scope.  On the two pictures below you can see the colour bands clearly on their legs. 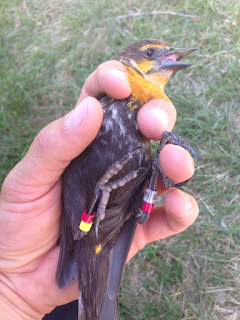 The colour band sequence on this female is left leg, red over metal, right leg, yellow over red. 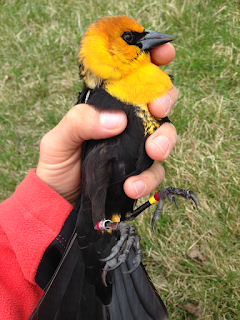 The colour band sequence on this male is left leg, yellow over red, right leg, red over metal.  The opposite of the above female.

This summer (2015), I captured and colour banded 17 adult yellow-heads on two sloughs.  Now we wait to see who comes back. 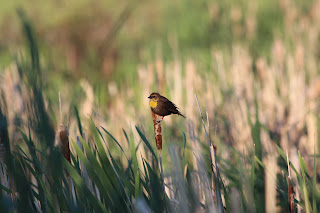 Can you see the band on this females leg? 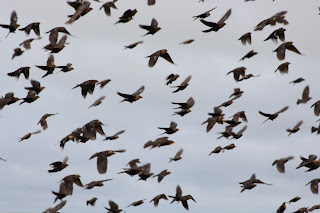 During the winter, Yellow-headed Blackbirds form large flocks.  This one was down the road from our place in September and even includes a male red-winged blackbird.  I wonder where this flock is now.

Just saw a male at one of the roundabouts in Balgonie.